Finally, these impressive recordings are now available on SACD. Due to the difficulties of buying this TowerRecords album, you may find the following link ... 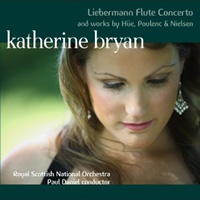 
It has been a great pleasure for me to have recorded these four special pieces.

The Nielsen concerto will always feel very personal to me after winning a national competition with a performance of it when I was a teenager. The Hue and Poulenc are both pieces I love and have played many times in recital with piano, so to play them in their orchestral versions has brought a new and exciting dimension. I feel that Lowell Liebermann's concerto encompasses all the emotions and colours of which the flute is so brilliantly capable and it is for me, quite simply a 20th century virtuoso masterpiece, and thrilling to play.

I hope you enjoy this disc as much as I did recording it.

A disc of fine playing with disappointing sound.

Liebermann's concerto is somewhat Hollywood-esque, not that there's a problem with that in itself and it is nice to have melodic C20 scores recorded for a change but listeners should be aware that this is not the most intellectually satisfying 25 minutes they will ever hear. The tempo marking "moderato" for the first movement is merely to allow for demi-semiquavers, which Bryan copes with consummate (one might even say nonchalant) ease. The dialogue between leader and Bryan in the Molto adagio is most effective and she displays her ravishing, floating tone to the full here before displaying a much harder edge in the vigorous Presto finale. Bryan expresses about this work, in a short welcome note, similar sentiments to Julia Fischer about the Khachaturian concerto - the same dedicated and thrillingly virtuostic approach is also common to these artists.

Hue's Fantasie starts with a curiously Scottish feel before diverting to a more continental, Francophone style. In both, Bryan sounds completely at ease and displays consummate virtuosity, especially in the more exotic (quasi-Arabian finale). More Francophone playing (via England this time) in Lennox Berkeley's arrangement for orchestra of Poulenc's Flute Sonata. It is hard to slide a card between Bryan and Bezaly's account (Masterworks for Flute and Piano 2 - Bezaly, Brautigam) - both are superb and whilst purists will necessarily favour the BIS recording, I would be loathe to be without Berkeley's inspired transformation; especially given such a vivid and tender account.

Closing the disc is Nielsen's Concerto for Flute and Orchestra, a very different proposition stylistically as the opening orchestral flourish demonstrates. Bryan, the RSNO and Daniel adjust well to the changed musical landscape and the myriad of technical difficulties contained, particularly in the finale. The playing is sure to make even the most sceptical listener warm to Nielsen's idiom if they have not before.

The sound is the one characteristic of the disc that is not completely agreeable to these ears: the instrumentalists are rather closely balanced and the consequence is a rather dry and hard sound. Chandos (Elgar: Violin Concerto - Little, Davis) had much more success in flattering this ensemble and it is a shame that the Henry Wood Hall was chosen for this probably necessitated most of the unappealing aspects of the sound. The level of detail obtained is good though.

Recommended for the playing, if not the sound. 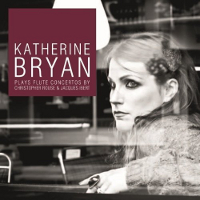 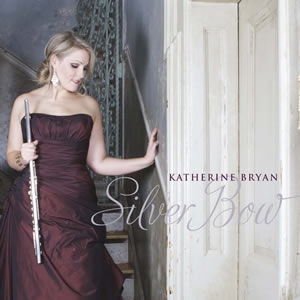