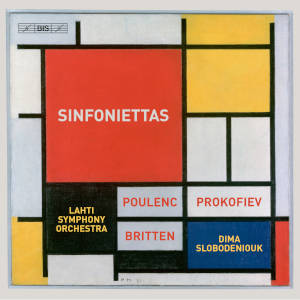 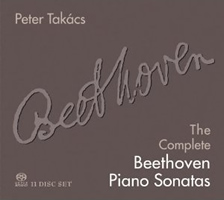 To listen to the whole canon of Beethoven's piano sonatas in a relatively short time is the musical equivalent of a pilgrimage. It is impossible to overestimate the importance of these works to the whole literature of the piano. Most big recording companies and their internationally-famed contract pianists undertake one or more sonata series by issuing separate discs over a lengthy period of years, which may finally be boxed as a set.

However, Romanian-born Peter Takács, after much scholarly study of the Beethoven sonatas over his whole career, as well as being a veteran of concert performances, wanted to produce a unified and complete set of the canon. He enlisted independent company Cambria Music of San Francisco, who have a good piano catalogue and knowledge of SACD production. A fine recording site was located at the Concert Hall of the Music and Mass Communication Department of Austin Pecry State University in Clarksville, Tenessee. The hall comes with a magnificent Bösendorfer Imperial Grand piano, which has turned out to be one of the stars of the recordings. Sessions began in December 2001 and concluded in early September 2004.

A great deal of care has gone into SACD production and presentation. Housed in a robust slip case is a 144-page hard-back "Notes" booklet, with 11 discs in stiff card sleeves securely bound in a similar chunky hard-back book. In a pocket on the inside back of the notes book is a large fold-out entitled "Beethoven Timeline" (produced by Marina & Victor Ledin in 2010). Following Takács' evident insistence on context as an important guide to listeners of Beethoven's sonatas, the timeline follows each year of the composer's life, giving notes on biography, music, literature, science and historic events. Made in heavyweight high-quality coated paper, the fold-out should survive use for some time.

The "Notes" booklet is also made with very high-quality paper, well laid-out and printed in easily readable text. It is copiously illustrated by lithographs and watercolours of Beethoven and his environment (for some of which you would have a long search through many Beethoven biographies). Takács provides an introduction entitled "The Mind of Beethoven - A Performer's Perspective", in which he lists and discusses the emblematic characteristics of Beethoven's work on his piano sonatas. This is supported by many music illustrations. He follows with "A Note on Interpretation", where he clearly states his viewpoints about editions, textual problems and tempi. He also admits to making adjustments in high and low registers on the modern concert grand, where the narrower compass of Beethoven's keyboard forced the composer to delete some notes which were unavailable to him at the time of composition (although they often were available later as pianos continued to improve).

Takács also makes a particular point of telling us that he rejects the metronome marks for the "Hammerklavier" sonata as being too fast, acting against the proper character of each movement (the question of whether Beethoven's Maazel Metronome, then a new invention, was faulty or not has caused controversy for many years). I admire this transparency from an artist; would that others could emulate it. Solution of such issues, of course, must come down to the instincts of each interpreter.

Michael Grey contributes several pages giving us an interesting history of recitals and recordings of the "32". The final section of the booklet is a brief sonata-by-sonata commentary by Takács, again with copious musical examples.

I set out on my listening pilgrimage with some well-loved Beethoven sonata sets (often miscalled "cycles", but this term correctly refers to a series which repeats) for reference: Schnabel from the 1930s, of course; the ever reliable Brendel, and fairly recent sets from Paul Lewis, Richard Goode and the recently acclaimed Luis Lortie.

My pilgrim's progress played the sonatas in chronological order, facilitated by the disc contents, which are mostly ordered thus (note that the traditional numbering of the sonatas is incorrect in places). As Takács says, this is the best way to appreciate the sequence of amazingly inventive developments in Beethoven's struggle with the sonata form, from its Haydnesque beginnings to the final profound, transcendental creations. En route, I referred to sets by Schnabel, Brendel, Goode, Lewis and Lortie, all renowned.

Takács has a thorough understanding of the Viennese Classical style in piano playing, and adapts this to the Bösendorfer Imperial almost seamlessly. He is dutiful in observing Beethoven's instructions in dynamics and phrasing where they are clearly stated, and restrains the modern piano's potential dynamic power relative to its period cousin's abilities; pp - ff is the total range used. His ability to switch in a natural way from Beethoven's quite lyrical style to startling peremptory outbursts is the key to giving each movement a cohesive flow which some other pianists do not quite manage. In other words, I had a real feeling that Beethoven's characteristically episodic styles really "made sense".

Technically, he is capable of coping with all the difficulties that Beethoven throws at a pianist (of the "Hammerklavier" sonata, Beethoven happily boasted "that will keep pianists occupied for 50 years"). He also has a great gift for making the most of Beethoven's glorious Adagios, with a warmth of singing tone and subtle phrasing which takes one's breath away. Takács also delights in the many faces of Beethoven's humour, a fundamental feature of the sonatas. Be it delicate whimsy, powerful gruffness, noisy clumsiness, outrageous wilfulness or tongue-in-cheek banality, Takács can shape the playing to order. I found myself smiling or laughing out loud at times, particularly at throw-away cadences.

Highlights for me are the clarity and verve of the first three sonatas, the Opus 10 and Op. 31 sets, which are meticulously and affectingly done; the attention lavished on many of the less well-known sonatas, which are given new status, and the utterly amazing three last sonatas, which Takács has illuminated for me with many psychological insights, so that I began at last to understand them. You also get a powerful and deeply felt "Waldstein" and a poignantly lyrical "Appassionata" with its finale quite thrilling enough at Beethoven's stated tempo instead of the hurricanes of Schnabel or Richter (it is after all only marked Allegro non troppo, and reaches a simple Presto just for the last few bars). You also get the chance to hear on Disc 11, the Andante favori which was rejected from the Waldstein sonata, two juvenile sonatas (charming), the three "Elector" sonatas, important because the 12 year old Beethoven produced full scale works in this set, which clearly are taken up and developed in his later Op. 2 set. There is also a pleasantly entertaining sonata for piano duet in D, Op.6. These make up a complete set of sonatas together with the 32, and cast much light on Beethoven's initial dealings with sonata form.

Takács and his well-prepared Imperial Grand seem to be made for one another. Unlike many other pianists when accumulating their sonata sets, he has had the advantage of using the same piano in the same venue. He seems to relish the rich Bösendorfer sound, producing golden tone in the midrange, brilliant but never harsh figurations in the treble, and a deep granite-like sonority in the lower range, which is somewhat drier than the Steinway's and thus provides decent definition of Beethoven's powerful bass lines, which can otherwise be muddy.

I have little to say about the engineering of this set, because it is so good. Recorded in DSD using Genex and Pyramix recorders in stereo and 5.0 surround, it is remarkably consistent through the sessions (I noted a little more ambience on Disc 11). The image of the Bösendorfer is rock-solid and so realistic that if one closes one's eyes, the stage set-up seems to materialise between your speakers. In surround, the sound of this wonderful instrument is even more realistic, with a low noise-floor and plenty of tonal bloom. The hall ambience itself does not present any distinctive acoustic signature to disturb the piano sound. I suspect that this is arguably one of the best recordings of a Beethoven sonata set.

Full sets of Beethoven sonatas can be an expensive outlay, and tyros will want to own more than one, as the sonatas are obviously amenable to a range of personal interpretations. Leaving aside the revelatory series on period instruments by Brautigam, there are dozens of sets recorded on modern instruments vying for purchase. All I can say is that my sonata pilgrimage has been a most enjoyable and informative experience - thanks to having Takács as my spiritual leader, as it were. His deep understanding of the music's origins, lack of eccentric habits or extreme interpretations and sheer intensity of communication of his love for the sonatas has been thrilling and moving. Given the added bonus of the magnificently produced box and its contents, this can only be a highly recommended (and truly complete) set of Beethoven piano sonatas.

ADDENDUM
For a splendid introduction to the Beethoven Piano Sonatas, Andras Schiff has recorded a series of lectures outlining each sonata for his London concerts of the 32. His urbane, often humorous approach is delightful, and he provides many insights and contextual information from the pianist's point of view, illustrated on the piano. Download free from the Guardian Newspaper at http://www.guardian.co.uk/music/musicblog/2006/nov/01/andrasschiffonbeethoven.
JM