I was able to get a copy of this one, after a mixed impression from the redbook release for the full cycle I previously acquired. So, I made a comparative listening to the ...

Athenaeus, you are most likely correct. I greatly value the reviews here so I just wanted to express my wish for expanded coverage. Marcus Las Vegas, NV 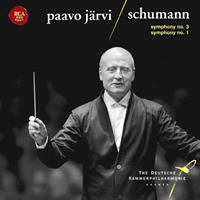 Realising that previous judgements of Schumann's orchestrations as inept, grey and opaque were due to the symphonies being played by large modern symphony orchestras, many conductors have now revealed the beauty of these early Romantic Works by using reduced and properly balanced ensembles. John Elliott Gardiner, for example, used a period instrument band of 50 members, the same staffing as the Gewandhaus orchestra in Schumann's time. Thomas Dausgaard engaged the Swedish Chamber Orchestra of about 30 players for his set in the BIS "Opening Doors" series on SACD. For its Schumann Project, the Deutsche Kammerphilharmonie fields around 50 players, the extra weight and richness of sound immediately telling when compared with the Swedish Chamber Orchestra (not to mention RCA's more immediate recording).

The first disc in Järvi's new Schumann Project carries Symphony No. 3, op. 97, the 'Rhenish' (Schumann's own name), which was in fact his last symphony chronologically, and Symphony No. 1 op.38, the 'Spring' Symphony, also so-called by Schumann. Unusually, the Rhenish is placed first in order on the disc. There are no fill-up overtures as with Gardiner and Dausgaard.

From the first few bars of Järvi's Rhenish, one is aware that this performance is something special. Slightly broader in tempo than Dausgaard, it launches a beaming sunny view across the Rhine Valley as convincing as any modern travel poster. The score is opened up to a degree of clarity I haven't heard before in any of my Schumann symphony collection. For example, the running quaver passages in the middle strings at the start are clearly heard, giving an excited push to the surging main theme; these go for nothing other than vague harmonic support in other recordings. The deft antiphonal tossing of themes between the violin sections has perfect timing, adding to the excitement. Horns ring out superbly, staccatos are more prominent than usual and the overall rhythmic pulse is irresistible. So the Kammerphilharmonie's amazingly crisp ensemble, outstanding articulation and expressive phrase shaping, which are so much a feature of Järvi's Beethoven cycle, are also fully on show here. And it is not just textural detail which informs the playing, but Järvi's strong grasp on the overall architecture of each movement and of the symphonies as a whole.

The Rhenish's Scherzo has a really jovial "schwung", more rustic than most; it is after all a village Ländler, and its gorgeous cello and viola melody might have been meant to mimic the great stream of the River Rhine. Once more, Järvi follows the score to the letter. The "oom-pa-pa" accompanying rhythm has the first note given "strongly" to the basses, while the violins, trumpets and horns have the other two notes - but each is marked "tenuto", meaning that they should be held slightly longer than their crotchet note value. If these instructions are properly observed, the true lilt of the Ländler is felt. Most conductors seem to be content with a simple waltz rhythm, with the accompaniment to the Big Tune barely audible; but the VPO with Bernstein manage it quite well, only to be thwarted by Bernstein's insistence on slowing down the last few notes in each phrase of the melody. In the Trio, the fleeting staccato phrases are done by the Kammerphilharmonie with a lightness of touch worthy of Mendelssohn's fairies, not to mention a delicious cheekiness which I've never heard in other versions. The sumptuous return to the flowing Ländler tune carries sparkling descants from the violins.

In the third movement, for strings and woodwind only, Järvi's players make more of the accompanying divided violas in the first few bars, also contouring the hesitating melody beautifully, giving it a delicately expressive coyness - perhaps love music for Clara. In its trio, divided cellos and violas are in delicate counterpoint, in an utterly charming interlude which put me in mind of the Dorabella section of Elgar's Enigma Variations (Elgar was devoted to Schumann's music). "Feierlich" (solemn) is Schumann's instruction for the fourth movement of the Rhenish Symphony, thought to be a memory of one of the great Gothic cathedrals on the Rhine. Here, the low brass and winds produce chords which convincingly emulate a big organ, and Järvi takes his time to build the majestic climax with a rich sonority, particularly in the bass, which belies the relatively small number of players. The shades of JS Bach are not far away in this movement, which is given all the suspenseful tension and gravitas which it needs.

The Rhenish's Finale is highly charged with syncopated rhythms, bubbling over with good humour. On the way, there are sections which are so clearly characterised by the players that one could visualise pompous town clerks, chattering market crowds and mischievous young rascals - just the sort of projections which an early Romantic composer would write about. I've never come across another performance which had such a rich inner life as this one.

The Spring Symphony receives a similar refurbishment, to the extent that I thought at first that Järvi was using a different edition of the score, but the secret appears to be careful reappraisal of what Schumann's intentions were, in the context of his debt to Beethoven and the heady new ideas of Romanticism. This is not just another run using the accumulated performing practise. Judicious internal balancing and an orchestra which is superbly responsive do the rest. Based on previous recorded material, I have long thought that, given his innovations in piano music, Schumann's symphonies were not quite from the top draw. Having heard this disc, I'm now convinced that the musicologists were correct in considering him as one of the most important contributors of symphonic development in his time.

Polyhymnia's recording is very good, apparently recorded live (although there is no evidence of an audience) with some patching from a rehearsal. Its venue, Funkhaus Köpenick in Berlin, is ideal for this music; its short reverberation time allows a great deal of inner detail to reach the mikes, while still bestowing a pleasant bloom. The sound-stage is sharply focussed, with clear perspectives although perhaps missing some warmth, and a strong bass supports the wide range of dynamics which the orchestra commands. The only oddity in this presentation is the sleeve note, which, rather than describing the music and its context, offers a very detailed chronology of each work's conception - in the present tense, so it thus reads very curiously. An account of the aims of the Schumann Project is mainly about the Beethoven Project, but also includes some fascinating material about Schumann's sad committal to an Asylum at the end of his life; it is now suggested that his illness was not insanity compounded by syphilis, but stress-induced alcoholism misinterpreted by his doctors.

A treasureable and revelatory disc of the alpha and omega of Schumann's symphonies; I can hardly wait for the other pair. 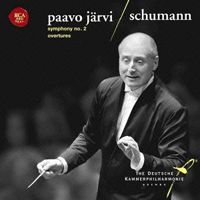 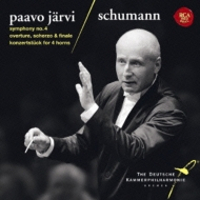