DYB, last week I finally received Sanderling's Dresden Brahms cycle on SACD. Indeed fabulous recordings. (Although the album seems to be sold out in most places including ...

Thanks Mark. I did not know I could change my user name. I am implementing a password manager which is what created the email address user name previously. I've changed it now ... 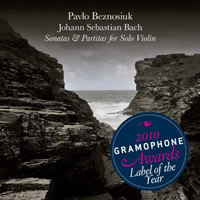 
On this double album, Pavlo Beznosiuk gives a splendid performance of Bach's renowned Solo Sonatas and Partitas for violin. Beznosiuk handles these demanding virtuosic compositions with surprising ease and agility. This seemingly effortless performance can possibly be attributed to how attuned Beznosiuk is with Bach through the music, an enchanting connection that is captured by this recording. The performances are full of passion and vigor. Beznosiuk's interpretation and development of the musical lines of these compositions is extremely compelling and bring out the compositional strength of one of the greatest composers to ever live.

The chief claim of this must be that it is the first set of the Sonatas and Partitas for solo violin on SACD to use a period-appropriate instrument.

Many listeners will know Pavlo Beznosiuk from his role as (guest) leader/director of the Academy of Ancient Music and Avison Ensemble; indeed the latter groups superb set Handel: Concerti Grossi Op. 6 - The Avison Ensemble we owe to his inspired musicianship. He is also renowned as a soloist in the pre-Romantic era, as his collaboration with Rachel Podger (Mozart: Sinfonia Concertante, Haydn: Violin Concerti - Rachel Podger) demonstrates.

For those blessed/cursed with absolute or perfect pitch, after the ear adjusts to the lower tuning frequency that was common in Bach's day, one can begin to appreciate the mastery of composition that he bequeathed us as a small part of his legacy. Beznosiuk strips layers of performing mannerisms away that are not necessarily in keeping with what the writing implies to less Romantically influenced ears. He is also very successful at distinguishing between the main melodic line and the embellishments (as chords or passage work) which would greatly aid the understanding of any newcomer to this opus. Sadly, what prevents even a qualified recommendation is the frequent and obtrusive intonation problems that are all too apparent and not a feature of stylistic Bach playing as anyone familiar with Podger's Bach concerto discs (Bach: 2 Violin Concertos, Double Violin Concerto - Manze, Podger or Bach: 2 Violin Concertos - Podger) would know.

The recording is highly revealing - arguably too revealing - and one can hear every stroke of the bow as well the generous acoustic of St Martin's East Woodhay.

For now, for all the misgivings a dedicated follower of HIP might have, Bach: 6 Sonatas & Partitas - Fischer is still (at present) the most easily available and best performed set of this repertoire - those possessing this set need not worry themselves about collecting this release.