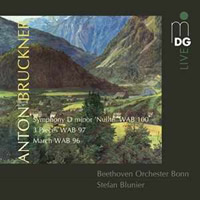 
Intrepid Survivor
The Beethoven Orchestra of Bonn now performs for us a Bruckner symphony that is only rarely heard and really should no longer exist. The composer “annulled” this work instead of destroying it and later even willed it to the Linz Regional Museum. This Symphony in D minor was first performed posthumously in 1924 on the occasion of the hundredth anniversary of Bruckner’s birth.

Intriguing Question
This symphony without a number was actually the second symphony by the devout Anton Bruckner, who grew up in the Catholic country milieu of Upper Austria. We do not know precisely what it was that led him to reject this symphony. Might it have been its overly classical design with four movements? In it too, however, we encounter tones typical of Bruckner. In any case, we have to do with a complete symphony never revised by him: a highly welcome rarity in view of the many variants found in his symphonies.

Irresistible Style
“Nobody can resist the solemnity, profundity, and purity of this musical language,“ Wilhelm Furtwängler judged, and he was right. Nobody before Bruckner had ever composed so monumentally and gigantically. Only Gustav Mahler would succeed in writing symphonies longer than those by this Upper Austrian.

Inaugural Documentation
This SACD presents yet another rarity with the world premiere of the four orchestral movements. These works immediately preceding Bruckner’s first symphony form the earliest documentation of his orchestral music.

This SACD is an essential purchase for Bruckner aficionados, as not only does it contain an eloquent performance of Bruckner’s early D minor Symphony WAB 100 (Nullte) in superb sound, but also some other rare orchestral music by the same composer.

Though written in 1869 after both his ‘official’ Symphony No.1 in C minor and the even earlier Study Symphony in F minor, the composer, displaying his usual lack of confidence in his compositions, declared the work ‘not worthy’ so it was never assigned a number by him. Fortunately he did not destroy the score, but eventually willed it to the Linz Regional Museum and it received its first performance in 1924.

Nowadays it is usually referred to as Symphony 0 whilst the Study Symphony is called Symphony 00. Peculiar as this numbering may seem, it does keep the symphonies in the correct chronological order. The thematic catalogue of Bruckner’s music, ‘Werkverzeichnis Anton Bruckners’ (WAB), attempts to clarify this even further, and in the case of the symphonies the WAB number is 100+ the published number.

This symphony is such an immediately attractive work that its neglect in the concert hall is to be regretted, and, with the benefit of hindsight, one wishes that it had taken its rightful place in the canon of the composer's numbered symphonies. Fortunately its dissemination on record has been more successful and many conductors with a special affinity to Bruckner's music have committed it to disc. These include fine performances from Haitink, Barenboim and Skrowaczewski to which this distinguished account can now be added.

Having been mightily impressed with Stefan Blunier’s expansive performance of Franz Schmidt’s 4th Symphony Schmidt: Symphony No. 4 - Blunier I was eager to hear how his Bruckner would sound, and was not disappointed. In the earlier recording Blunier showed that he was adept at sustaining the natural unfolding of a symphonic work over a long span, and once again this proves to be the case.

The heavy tramp of the lower strings with which the first movement begins will, even to the innocent ear, immediately suggest Bruckner as the composer, while the gentler theme that follows will surely confirm it. Blunier handles the rapidly changing moods of this movement with great skill. His tempi are generally very measured, allowing the climaxes to build thrillingly with notably rich string tone and magnificently played brass chorales. The serene slow movement flows at a commodious tempo, certainly much closer to ‘Adagio’ than ‘Andante’, but thanks to the exquisite and totally committed playing that the conductor elicits from his fine Bonn orchestra it just about convinces, though perhaps his pause of a full 14 seconds silence towards the end of this movement may be too much for some listeners to take.
The Scherzo is launched with tremendous energy and verve making the contrast with the preceding movement’s mood even greater. The Finale, that surprisingly contains passages reminiscent of Mendelssohn, is also played with great vigour and Bruckner’s contrapuntal writing emerges with both strength and clarity.

At 50’11” Blunier’s performance lasts about five minutes longer than the average time of other versions and some may feel that he tries to inflate this music to something beyond its worth, but for this listener his spacious interpretation was entirely convincing and gave the music a stature entirely lacking in, for example, Solti’s CD recording that dispatched the piece in a mere 38’ 13”!

The four brief fill-ups to the symphony date from 1862 and represent some of Bruckner's earliest orchestral writing. Though not especially memorable or representative of the composer's later music they do possess a winning fluency and are worth hearing for their pointers to the composer’s development. The jaunty five-minute D minor March (WAB 96) has a robust charm, while a gentle lilting central section provides contrast before the reprise of the march. Each of the three pieces (WAB97) that follow is even briefer. The nobility and grandeur of the E flat Moderato is followed by two wistful Andantes, the first of which feature lovely solos for oboe and horn. All four pieces could be easily mistaken for the Schubert of the early symphonies or ‘Rosamunde’, but their excessive brevity will always make them little more than a curiosity.

MDG’s multi-channel recording is very fine indeed. It has a wide dynamic range and captures both the orchestra’s hushed string playing and incisive brass with equal success in an airy and generous acoustic. Though these are live performances (from 25-27 May 2010) there is neither audience noise nor applause. 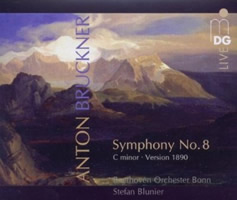