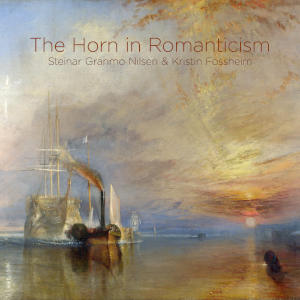 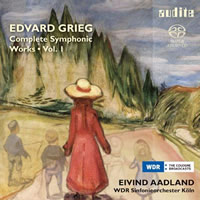 
"The time has come to step forward with a work which is notable in both form and content." These were the words of Edvard Grieg's publisher, reminding the composer of the major genres of the time: symphony, oratorio, opera. But Grieg did not feel the need to write another symphony and another opera in the Middle European style. He wanted to give Norway its unique voice within European concert repertoire. And he did that with songs and piano pieces - and particularly with his symphonic works, released by audite in a five-part complete recording with Eivind Aadland and the WDR Symphony Orchestra. This first SACD of the complete edition presents Grieg's principal collections: his four Symphonic Dances Op. 64 of 1898, where the composer draws on his experiences as a conductor of the leading European orchestras; and his two suites from the incidental music to Henrik Ibsen's drama Peer Gynt, the story of the "Nordic Faust" which inspired Grieg to compose a sonic panorama of the Norwegian character - from the melancholy song of the abandoned Solveig to the furious chase in the Hall of the Mountain King.

Eivind Aadland's roots in the tradition of Norwegian folk music audibly influence his interpretations. He comes from a family where Norwegian folk music played an important role, and already as a child he came into intensive contact with Grieg's music. Ideal prerequisites therefore to rediscover Grieg's symphonic works against the background of this tradition. Further details are contained in the booklet. Grieg's connections with Germany stretch from his studies in Leipzig to his numerous concert performances in that country. Added to that is the extraordinary circulation of his works in Germany. This recording with the WDR Symphony Orchestra Cologne therefore also represents on several levels a German-Norwegian synthesis which had already been in existence during Grieg's lifetime. This complete recording by audite includes Grieg's symphonic works as well as orchestral works from his incidental music, compiled by the composer himself. Parallel to the release of the fi rst SACD a video will be available which will be also presented on www.audite.de. The second volume of the complete edition is scheduled for release in August 2011.

Grieg's current popularity would have astonished the composer. His "immortal melodies" are frequently encountered as thematic music for radio and TV programmes as well as advertisement jingles. Not to mention the countless recordings. In recent years, no less than three complete series of the orchestral works have been put on the market. The acclaimed set by Ruud and the Bergen Philharmonic Orchestra (BIS) is finished, with excellent SACD sound, and includes the vocal music with orchestra. Another set is under way from Engeset with the Malmö Symphony (Naxos) on RBCD and now Audite launch a set with Aadland and the WDR Symphony Orchestra of Cologne, the second on SACD. It promises 5 volumes, with the excellent acoustic of the Philharmonie, Cologne as the venue.

Elvind Aadland grew up in Bergen, Norway, close to Troldhaugen, Grieg's home, now a museum and concert centre. His father was an accomplished player of the Hardanger fiddle, so Elvind grew up surrounded by traditional fiddle music. Not surprisingly, he became a violinist, and at an early age made inevitable contact with Grieg's music, playing chamber works at Troldhaugen, accompanied by the composer's own piano. Elvind was concertmaster at the Bergen Philharmonic from 1981-89. In this new series of Grieg's orchestral output, he has evidently gone beyond the long tradition of Grieg performing practice in Norway, taking a fresh look at the importance of folklore in Grieg's music. Performing with an orchestra steeped in German Romantic repertoire, he seeks to bring the rhythmic, harmonic and textural compliment of Nordic folk music to the fore, lightening the orchestral sound.

Does this approach work in practise, conveying more of the Grieg spirit even than Beecham, Barbirolli, and Karajan, not to mention his compatriot Ruud? On the evidence of the first instalment, I would say Aadland has been successful. The programme is a challenging one; the two Peer Gynt Suites are among the most recorded of classical works and the Op. 64 Symphonic Dances (orchestrated from a piano duet version) show Grieg's adroitness, if not mastery, in classical formality. The Symphonic Dances have to compete with a peerless 1957 recording from John Barbirolli and the Hallé, in good stereo (if suffering somewhat from the ping-pong exaggerated left-right effects of the era).

In close comparison between Barbirolli, Ruud and Aadland, Barbirolli clearly gets his sparkling performance partly from faster tempi in each movement (in the first movement, he knocks more than 2 minutes off Ruud's 8'17"). He also emphasises the downbeat in each bar, a propulsive requirement of the folk songs from which this music is wrought. Aadland, on the other hand, is only a few seconds faster than Ruud but his orchestra sounds much more rhythmically energised than Ruud's. The Cologne brass choir are magnificent and quite thrilling, giving the piece as much light and shade as Barbirolli, but without the need to speed up. Indeed, the sheer vigour and jubilation of some passages in the outer movements under Aadland's baton reminded me of Aaron Copland! With the simply lovely oboe and flute song of the second movement as fluent and ardent as Barbirolli's, and a swaggering waltz in the third movement, Aadland presents a fourth movement which would surely have pleased Grieg as an applause-worthy finale. The Cologne orchestra produce a stunningly folksy and passionate ending to the Dances, with a cheeky brio which I found most infectious.

The two Peer Gynt Suites go well with Adland too. These have a Romantic rather than a folkloric voice, and the WDR Symphony are on their mettle, with Aadland spurring them on to spin rich colour effects in each of the pastiches. The strings especially (violins divided across the stage) produce beautiful tone in 'Morning Mood' (not in a Norwegian fjord but on the coast of Morocco) and for 'Aase's Death'. Beecham's peerless performances were often produced by Beecham using his conductor's intuition - in Aase's Death, for example, he slows down considerably for the very hushed repeat of the melody, a magical effect, if not specifically sanctioned by the composer. Aadland does not go quite so far in his quest for expression in the Suites, but again his application of contrast, rhythmic buoyancy and devoted playing produces a memorable Peer Gynt set. It again outclasses Ruud's version, to my ears.

Completing the programme is the Funeral March for Rikard Noordraak, a great friend of Grieg and a fellow composer, who died in 1886. One of Grieg's most powerful and forward-looking pieces, it exists in several forms, for piano, for winds and brass (as on this disc) and for winds (as on Ruud's disc Grieg: Peer Gynt Suites - Ruud). Aadland's reading has immensely sonorous gravitas and is deeply moving. The merging of the brass and woodwind choirs recalls the very popular traditional penchant that Norwegians have for wind-bands.

Ruud's BIS series was noted for its excellent engineering, and this is matched by the very fine sound of the WDR Cologne orchestra, in a hall with somewhat more resonance than the Bergen locale. The vividness and energised sound of these Grieg pieces is conveyed with great immediacy and pin-sharp focus, giving the hope that the rest of the series will be of similar quality. The disc is presented in a 3 fold digipac, with a removable booklet tucked into a slit in the inside rear fold. Apart from an error in the track listing (the first movement of the Symphonic Dances is Allegro moderato, not Allegretto; this is correct in the embedded tracklist text on the disc), the information is very good and the Munch painting of the cover quite apposite.

A very promising start to a new Grieg series; Aadland's readings here have the freshness of re-thinking and careful priming of the German orchestra with his experience of Norwegian folklore, which, on this disk at least, seems to leave many other more traditional performances somewhat behind. 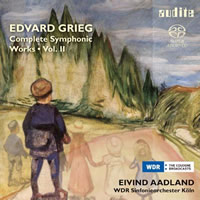 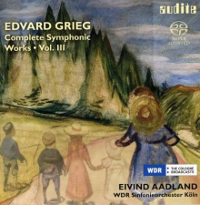 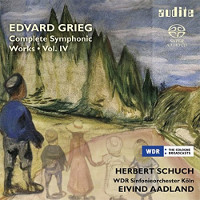 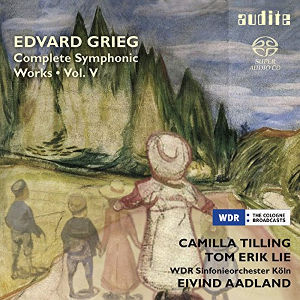 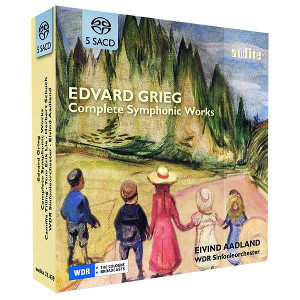