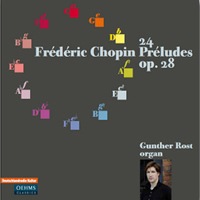 
As with all cycles from this age that systematically traverse the circle of fifths, Chopin’s 24 Préludes op. 28 are written in the tradition of J.S. Bach. It is no wonder that this work holds a very special attraction for organists. In the past, Chopin Préludes have often been adapted for organ – and sometimes greatly changed. Gunther Rost takes another path in this recording. He plays the unchanged musical text of the original versions for piano, replicating the diversity of the composer’s dynamic markings by the use of imaginative registrations. The instrument heard on this recording offers possibly the best conditions of all: the Seifert organ in the Church of the Virgin Mary in Kevelaer has over 135 registers, making it the largest romantic German organ in the world.

With this release, Gunther Rost continues his series of organ transcriptions, which includes a recording of the Goldberg Variations as well as one of six instrumental concertos by Antonio Vivaldi.

In my youth, I played both piano and organ. A life-long love of Chopin was instilled by my piano teacher, who started with the simpler numbers of Chopin's 24 Preludes Op. 28 and took me onwards from there. At no time did it enter my mind to play Op. 28 (or indeed any other work by Chopin) on an organ.

From 1839 when the Preludes were published, in an era when transcriptions and arrangements were highly profitable, few composers and performers made use of the Preludes, which were almost immediately snapped up by pianists. Chopin's friend, cellist Franchomme, arranged several Preludes for four cellos, cello and piano or violin and piano. Liszt arranged three for organ, but he changed them considerably, sometimes giving them a chorale-like feeling. Later, the only organist who seems to have shown interest was composer-organist Lefébre-Wély, who sometimes played them on the organ. A few other rather eccentric selected arrangements, including Székelyhidi's one .for 2 Trumpets, 2 Trombones and Tuba and Mikuli's expansion of no 13 For Soprano, Female Chorus, Violin, Cello, Organ and Piano had only short lives and can be discounted. More appealing, though, are arrangements for guitar, made by none other than Tárrega. In this case, the intimate touch of finger on string can approximate a pianist's expressive touch.

It isn't difficult to find why Chopin's Op. 28 remained firmly in the hands of the pianist. These inspired miniatures are masterpieces of compressed emotions, expressed with Chopin's unique pianistic ingenuity and originality. The composer's technique relied on clear articulation (also a feature of his early wood-framed pianos), with a deep expressiveness which came from using the piano's ability to respond to keyboard touch (especially in a singing melodic line). Chopin advocated a rubato based on a steady left hand rhythm, against which he used slight speeding up or slowing down of the right hand line. None of these features can easily be duplicated on an organ, especially a large one in a correspondingly large reverberant acoustic. Moving the Preludes on to an organ also changes the context of Chopin's professional world, in which his performances were mostly to connoisseurs in salon apartments or small halls. These pieces do not scale up well.

Internationally acknowledged organist Gunther Rost courageously takes on the task of playing all of Chopin's 24 Preludes on a very large organ, apparently leaving the piano score "untouched", which he tells us is a "new manner, using the creative musical properties of the organ". His experiment apparently produced "sometimes surprising impressions of Chopin's masterpieces". The organ of the Church of the Virgin Mary, Kevelaer in Germany dates to 1905-1907, but was severely damaged in WWII and now only has 122 registers disposed over four manuals and pedal board in its refurbished console. With an original complement of 135 ranks, it was at the time Germany's largest organ. Immediately, it should be apparent that wielding such power and employing a large choice of sound colours, including 32' Bourdons and Bombards, is hardly likely to give even a pale approximation of Chopin's piano sound.

Apart from the physical techniques of playing, which I shall return to shortly, another major problem immediately appears on playing this disc. The Kevelaer church has a very large and reverberant acoustic, which absorbs and generalises any details - in particular smudging rapid articulation. The OEHMS engineering team have considerable experience of capturing the natural sounds of organs in their buildings. But here, the microphones are placed too far from the sounding pipes to capture enough detail for this particular project. Many of the Preludes are quiet, and these come across as noticeably distanced, frustratingly loosing the characteristic subtlety of Chopin's scoring, thus being incapable of evoking his sound-world.

Rost has a tendency to play some of quieter, gentler preludes on 4' ranks (i.e. an octave higher than Chopin wrote) to accommodate Chopin's instruction of 'Delicatissimo' or 'Leggierissimo' (on an organ this size in such a reverberant building?). The loud pieces, such as in Prelude 24, Allegro appassionato, fare better in sonic immediacy, but Rost tends to rely on bland foundation stops rather than using more exotic tone colours from the many registers available. I presume that this is because he was trying to avoid "organifying" the score (which might have produced a more exciting effect, as Liszt discovered). There was little he could do about the fast passage work becoming muddy, with much crucial detail being lost as the sound was smoothed out in the all-devouring reverberance.

Rost also adopts some rubati which at times seem quite eccentric. The first Prelude, marked 'Agitato' is quite slow, its upward arpeggios being oily and sickly sweet. In contrast, listen to a master pianist, where the piece is revealed as a highly emotional surging whirl. Chopin's second Prelude, marked 'Lento', has a repeated chordal bass, eccentrically played staccato by Rost. Instead of being a steady rhythm, it sounds like a chuffing train which slows up on the hills and then goes faster downhill. Prelude 4 has a similarly distorted left hand rhythm, going faster and slower with uneven note lengths. In these cases, one's attention is captured by the antics of the accompaniment rather than the melodic line of the right hand. Some of these cantabile RH melodies also have exaggerated rubato; I assume this is Rost attempting to give the lines some form of expression, which is not easily produced by the "cold" aspect of an organ make-up. However, I do admire Rost's virtuosity in fast figurations; it is a pity that the acoustic gobbles these up before they reach the listener.

Prelude 5 has very rapid RH arpeggios and wide leaps by the LH; Rost's effort comes across without any articulation and sounds uncannily like a music tape being played backwards, quite comical. Everyone's favourite, the tiny waltz-mazurka No.7 in A major, is very distant and subject to heavy rubato. It should sound elegantly and demurely affectionate, but in this vast acoustic is just sounds ridiculously out of place. I could go on with more non-pianistic oddities in playing, some of the preludes being hard to recognise, even with a score to hand.

As an experiment, this project would in my view always be declared a failure. As a scientist, I'm not unfamiliar with experiments giving negative information, which can be just as informative as a positive outcome. But In this case, the almost self-evident conclusion is that certain types of music simply do not transfer well to another medium.

I can't say that I enjoyed this disc. Each of the 24 Preludes had problems and distortions which filled my notepad; some less than others, but making frustrating listening for someone who has actually played and deeply admired Chopin's album of tiny miracles.

Not recommendable, then, to anyone who has heard the 24 Preludes on the piano (and certainly not those who have yet to hear the work). Attractive, perhaps, mostly to adventurous organ music collectors who want to hear it for themselves. When I had finished with this SA-CD, I played Martha Argerich's spontaneously brilliant version of the Preludes, and once again the world was back to normal.