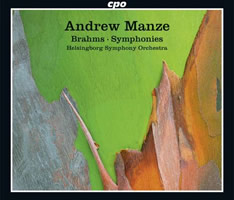 During recent years Andrew Manze has swiftly recommended himself as one of the most inspired and inspiring conductors of his generation. Driven by a great musical enthusiasm beginning with the baroque and continuing through to today’s music, Manze commands an astonishing repertoire and an extraordinary communicative talent that has enabled him to make many friends in orchestras as well as with the public. He received the prestigious Rolf Schock Prize in Stockholm in 2011, an honor bestowed on musicians of the rank of György Ligeti, Maurizio Kagel, Kaija Saariaho, Jorma Panula, Gidon Kremer, and Anne Sofie von Otter before him. Since September 2006 Manze has been the principal conductor of the Helsingborg Symphony Orchestra in Sweden. And it is precisely with this orchestra, conducted by Manze, that there is a wonderful interpretation of the Brahms symphonies that we have decided not to withhold from you any longer.

But let us allow the successful conductor to express himself in his own words: »He who releases the symphonies of Brahms in a new recording does not have to justify himself. The musical quality of the works and the fact that they have occupied a central place in the work of the Helsingborg Symphony Orchestra founded in 1912 speak for themselves. The present recording of the Brahms symphonies is unusual in that it avails itself of a ‘post-historically-informed practice,’ since many decisions pertaining to technical performance matters rely on the corresponding historical attestations but do not put these to use on authentic historical instruments but on conventional modern ones.« After Bruckner with Mario Venzago, now another great classic in »unheard-of« interpretations on cpo!

Manze's "post-h.i.p." approach (as he terms it) to the Brahms Symphonies is not particularly new. Mackerras and Harnoncourt have already led the way with orchestras using modern instruments and period playing practices. In the copious booklet notes he acknowledges that much of the scholarship, such as consulting MSS, first editions and documentation concerting performance practices has already been done. He does, however, suggest that one very important source has been overlooked by other conductors, i.e. the composer's own versions for two piano. In a world without packet scores, these were the materials by which musicians became familiar with the music, before the concert performances became the staples of classical music.

The two-piano scores were notated by Brahms with numerous phrasing and nuance marks not to be found in the orhcestra scores. As well as incorporating these into his new recordings, Manze sought to weed out many traditional performance practices which ignore the scores, such as slowing down drastically at certain places. As Brahms himself said, commenting on such distortions of his scores, "If I had wanted it, I would have written it".

Another feature of these performances is the size of the orchestra; not a major problem for Brahms himself, who premièred the symphonies with orchestras of 50 players (Detmold) to twice that (the VPO). However, the even larger forces of orchestras based in International capitals have a much larger complement of strings, with deleterious effect on the balance of the woodwind. Brahms writes for a severely classical orchestra, with woodwind only in pairs. For large orchestras, some conductors have been known to double or even triple the winds, in an effort to balance then with the strings, but making the sound thicker and more weighty as a result.

For this disc, the orchestral complement is a moderate 61, and this brings about a clarity and transparency which gives the lie to the legends that Brahms was a poor orchestrator, making textures thick and stodgy. The excellent Helsingborg Symphony Orchestra (from Sweden, not the Danish Helsingborg or Elsinore) is seated in the typical Germanic plan of the mid-1800s with the basses at centre rear and first violins left, seconds to right. This makes for some very clear and engaging badinage between the two sets of violins. Vibrato, although discretely applied, is allowed, as Manze does not hold to the myth of non-vibrato strings in the Romantic Period.

Having played the first disc, I was so captivated that I had to hear the whole set at one session. There wasn't a moment when I lost concentration or had wandering attention, as the playing is excellent. Although Manze's implementation of Brahm's extra markings and concentration on bow-speed in the strings rather than volume do not lead to radical differences, the overall effect of these symphonies is powerfully conveyed. This is a cycle which excels in clarity of structure, conveyance of emotion and fertility of invention.

The other orchestral works, such as the newly-minted St Anthony Variations, have the same degree of refurbishment applied to them. with outstanding results. The Academic Festival Overture has a wonderfully pungent, dry sense of humour (characterful bassoons and oboes), and its co-partner the Tragic Overture is a revelation. Lacking any "good tunes", it was rebuffed at the first performance and has had a low profile since, but Manze and his orchestra open it up with glowing textures, finally convincing me that it is worth repeated listening. Tragic it is not, nor was this its original name. "Serious" might be better, as it was composed as a counter-weight to the joyous Academic Overture.

CPO's recording, in the acoustically-famed Helsingborg Concert Hall, has excellent concert-style representation (perhaps those who prefer close-up sound should sample first). The surround speakers have plenty of output (and may require taming on some systems), giving the orchestra a very deep front-back perspective and good width. The lively ambience, in what is presumably an empty hall) could have produced noisy tutti, but the engineers have just about avoided that, so climaxes are thrilling but still preserve realistic detail. There is an excellent deep bass response, and some breathtaking takes of very soft string playing.

Such projects are bound to cause controversies, for there are those who are wedded to certain interpretations of these orchestral works by Brahms and this is reflected in early reviews. Nigel Simeone, however, writing in International Record Review, has awarded it an "Outstanding" badge, saying "...one of the most fiery, original and thought-provoking sets of the symphonies to have emerged in the digital era". I'm tempted to go along with that, and I would urge any listener who still has an open mind about interpretations of the Brahms symphonies to listen to this hugely entertaining set. Palms go not just to Manze but also to the Helsingborg orchestra, not yet a household name, but over the last decade has been recording for an increasing number of different labels.

Manze strikes a real balance between dynamism and clarity. These are performances that balance well between the "big band" and Brahms' preference for smaller numbers of players. An excellent cycle with some great fill up added in.