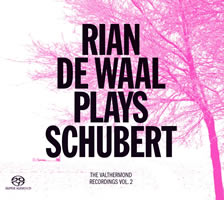 A wonderful issue of a tragic momento.

The sonata recordings are almost identical to Brendel's concert recording of 1997 (allowing for Brendel's lack of exposition repeat in the first movement) but one couldn't find a more different approach to the music. Rian de Waal is far less volatile than Brendel (some may be glad of this, others may miss the heightened sense of musical drama) and apart from benefiting from a far superior recording, de Waal draws a glowing tone that really sings - it is quite something to treasure on this score alone. de Waal is also mercifully more flowing in tempo than Kissin manages and so manages to give this score its much needed structure. Admirers of Richters astonishing accounts will not find much to challenge the great Russian pianist here but then de Waal's outlook is more lyrical than a quasi psycho-analytical study into the soul.

The slow movement is definitely not the slowest and places it as a genuine Andante sostenuto, rather than the somewhat tortured account of Kissin. As in the first movement, every detail is just "there" with no significant hiatus or disturbances to the longer line (although there are some moments that flirt with point-making for the sake of it). The third movement is largely good but the trio section is somewhat po-faced with the destabilising accents but the fourth movement is held together with the same calm, self-effacing artistry that was heard in the first movement. The Schubert-Liszt songs are given similarly good playing: self-effacing, natural & spontaneous sounding whilst clothed in some of the most golden piano to have graced SACD to date. The sound is remarkable - demonstration class for this Steinway D274 "Godowsky" doesn't oversell the recording achievement.

Clearly, in such an immense work (artistically and wrt duration), no one recording can hold all the answers but if one wants to hear a highly enjoyable account of the sonata that sounds as if it is being played in ones home, you won't go far wrong.