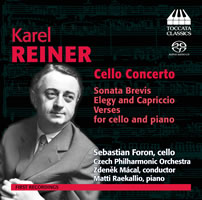 
Karel Reiner (1910–79) – a major missing voice in Czech music – suffered under both of twentieth-century Europe’s major tyrannies. As a Jew he was imprisoned by the Nazis, miraculously surviving a series of atrocities: Terezín, Auschwitz, a camp near Dachau and a death march. Then, back in Prague after the War, he was accused of ‘formalism’ by the Communists. This first CD of a series reviving Reiner’s music presents the large-scale Concerto he completed just before his internment in Terezín – and first heard, in this live performance, only in 2010 – and three chamber pieces which evolve though echoes of Janácek and Martinu to the brittle humour of the Stravinskyan Verses, one of his last works.