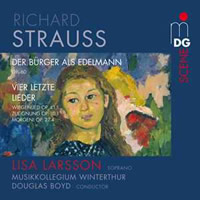 
Listening Facet
During recent years the Musikkollegium Winterthur has released an impressive series of recordings carefully produced in multichannel 2+2+2 sound. Under the conductor Douglas Boyd the orchestra adds a new facet to its discography with Richard Strauss’s suite Der Bürger als Edelmann and his Vier letzte Lieder – a fine programme and a splendid role for Lisa Larsson.

Magnificent Metaphor
The Swedish soprano’s intense interpretation of these masterful late works is a moving experience. Just listen to “Im Abendrot” to a text by Eichendorff: Strauss enhances the sunset atmosphere, transforming it into a magnificent metaphor referring to the end of life. The music seems to stand still at the end; full of confidence in redemption, it witnesses the opening of paradise – a gripping moment.

Swiss Style
The incidental music to Molière’s Der Bürger als Edelmann was Strauss’s first collaborative effort with Hugo von Hofmannsthal, who here reworked the baroque French comedy. This comedy focuses on a rich parvenu who clumsily attempts to imitate noble models, and Strauss illustrates it with humor and wit. The tone of the music repeatedly lets baroque stylistic elements shimmer forth and in this way builds a bridge from Molière’s time to the fin de siècle. The work exists in four entirely different versions published by Strauss with the same opus number, that is, as his op. 60. The genially instrumented Suite op. 60 (!) is practically of chamber dimensions and made to order for the traditional Swiss orchestra.

Lifelong Friendship
This is hardly surprising inasmuch as Richard Strauss maintained lifelong ties of friendship to Winterthur. The composer visited the city on repeated occasions and performed works of his such as the Alpensinfonie and Don Quixote with the Musikkollegium. Even today original manuscripts of his music are housed in Winterthur.

The ill-fated project by Hugo von Hofmannsthal and Richard Strauss to pair Molière's play 'Le Bougeois Gentilhomme' with an opera seria based on the Greek legend of Ariadne abandoned on the island of Naxos was an unmitigated disaster at its première in in 1912, but it did eventually yield the final form of the delightful opera 'Ariadne auf Naxos' that we know today; and in addition the delectable incidental music that Strauss composed for use throughout Molière's play. Originally this incidental music comprised a total of sixteen numbers, including some vocal ones. However, in 1918 Strauss assembled a 35-minute purely instrumental suite from the full score, and it is this that is the first item on this new recording from MDG.

The performance by Musikkollegium, Winterthur conducted by Douglas Boyd is efficient rather than characterful and lacks some of the charm and individuality essential for a full realization of Strauss's witty music with its engaging chamber music textures. The 'Entrance and Dance of the Tailors' (tr.4) is unusually pedestrian and the two Lully derived movements (trs. 5 and 6) are also rather ponderous. The limitations of Boyd's performance becomes most apparent when one turns to Rudolf Kempe's 1971 CD version with the Dresden Staatskapelle. Here the Suite really comes to life, while the recording wears its years lightly. On SACD Paavo Järvi (Pentatone) Strauss: Le Bourgeois Gentilhomme - Järvi and Fritz Reiner (Living Stereo) Strauss: Sinfonia Domestica, Le Bourgeois Gentilhomme - Reiner currently provide the only alternatives to Boyd, though it should be noted that Reiner omits the two Lully movements altogether.

The rest of the disc is taken up by Strauss orchestral songs sung by the Swedish-born soprano Lisa Larsson. A glance at her biography shows that her career to date has been mainly, but not exclusively, confined to the Baroque repertoire where she has had great success singing roles in the operas of Handel and Mozart. Her voice is certainly attractive - bright, steady and clear - and one can envisage her being a wonderful Zebinetta in 'Ariadne auf Naxos'. It is unfortunate that at this stage in her career she has decided to tackle the 'Vier Letzte Lieder'. These four songs represent one of the pinnacles of the soprano repertoire and inevitably comparisons will be drawn with the many great interpretations of the past that include those by Lisa della Casa, Elisabeth Schwarzkopf, Gundula Janowitz, Jessye Norman and Lucia Popp. The ecstatic vocal quality and refulgent tone provided by many of the finest interpreters of these wonderful songs is lacking in Lisa Larsson's performance. The accompaniment by Douglas Boyd and the Musikkollegium, Winterthur is workmanlike and generally brisk, but one misses the sumptuous orchestral richness found in the majority of alternative versions on disc. Sadly Larsson's voice is also not especially suited to the three of Strauss's most well-known songs that she has included in her programme. She is at her best in 'Wiegenlied' which she sings with an appealing tenderness over the orchestra's sympathetic accompaniment, but she sounds slightly uncomfortable and over-parted in 'Zueignung' which lacks the radiance found on many of the countless recordings of this song. This latter song, incidentally, is not performed in the orchestration by Strauss but that by Robert Heger, though there is no mention of this fact in the liner notes. The third song, 'Morgen' has inexplicably been placed after the 'Vier letzte Lieder' as if it were something of an after-thought. It is doubtful if many listener's to this SACD would wish to hear this song immediately after the sublime postlude of 'Im Abendrot' .

MDG's recording is clean sounding and quite well-balanced in the rather anonymous acoustic of the Stadhaus, Winterthur. There are, however, some audible thumps to be heard at times - possibly from the podium. The surround channels provide surprisingly little ambience.

All in all a rather disappointing release.

This disc is full to the brim of Strauss' most delightful music, with an overlap into some of his most profound compositions with the majority of the vocal items.

Opening with the suite to "Der Burger als Edelmann" or "Le Bourgeois Gentilhomme", the playing sadly points up the limitations of this performance. The notes are played in the right order yet all too often have little in the way of character - that it takes for the trombone entrance in "Der Fechtmeister" to inject a recognisable Straussian character is surely cause for complaint. All too often, the feeling is one of musicians too scared to express themselves for fear of making a mistake - the pianist is not one of them and too much feels "hammered". And if "Das Menuett des Lully" or the "Courante" are supposed to live up to their names, even the most recalcitrant anti-HIP listener will be wondering if the SACD is running at the wrong speed! It is all the more regrettable for this score is chock full of aural delights of the kind that will be familiar to those who've heard "Der Rosenkavalier".

Turning to the songs and on the very highest notes of Wiegenlied, it immediately that this music is technically beyond Lisa Larsson - a performance like this compared to Schwarzkopf's magical rendition under Szell's baton (Strauss: Vier Letzte Lieder - Schwarzkopf, Szell) shows just what is missing to make this a genuine lullaby. Strangely, many of the string lines that have melodic interest are missing in action - presumably Boyd's choice. When the voice ventures to the top of the stave in Zueignung, things fare little better and the problem is repeated throughout the Four Last Songs where Larsson offers no real competition to other SACD accounts such as Strauss: Eine Alpensinfonie, Vier Letzte Lieder - Harteros, Luisi (and the above Schwarzkopf account), let alone past glories on RBCD. That the orchestra can't muster themselves into a great performance is not surprising. The encore, Morgen, is (according to the Musikkollegium's own website) hampered by a string section out of kilter with Strauss' expectations. They are down a couple of violins but more seriously only having 2 double-basses when Strauss asks for 4...

The sound is good but not ideally revealing for Strauss, who has such a myriad of details that perfection is the minimum required.