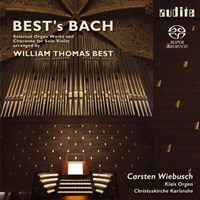 
"We must hope that that time is over in which these works, which are so full of deepest poetry and feeling, knew only one style of performance, only one and the same noisy, barbaric manner of playing.” (Foreword to William Thomas Best’s edition of Bach’s organ works)

In the musical life of today, after several epochs of a free approach to instrumentation, arrangement and other “external” details of a composition, it seems that only an historically authentic interpretation is thought acceptable – performers play from facsimiles or original scores, and historically accurate orchestration, articulation, etc, fulfil a major role.

This recording of selected works by Bach in organ arrangements by William Thomas Best (1826-1897) gives evidence of an approach to Bach’s compositions that may seem quite capricious today. Alongside his arrangement of Bach’s Chaconne for violin from the Partita no. 2 in D minor, this SACD presents highlights from his comprehensive edition of Bach’s organ works, from chorale preludes to the C minor Passacaglia.

In his editions and arrangements Best saw it as his mission, particularly for an English audience which was entirely unfamiliar with Bach’s works, to provide the organist with what amounts to stage directions in matters of choice of tempo, articulation, registration, selection of manuals and, where appropriate, the use of the swell pedal. In this way the great free-standing organ works appear as dramatic scenas or ballads, while the smaller-scale works and chorale preludes come across as poetry.

Best achieves a convincing dramatic presentation of Bach’s music: by means of refined, well-placed tricks of the trade the poetic meaning of individual passages is made apparent, and his economy of means and avoidance of all superficial effects enable the grandiose form of each work to come to the fore. The performance indications (or rather suggestions) are presented in such a way that the organist is amply challenged as a musician, interpreter and personality at all times.