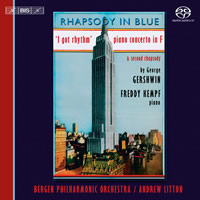 
The arresting clarinet glissando at the start of George Gershwin’s Rhapsody in Blue is probably the most famous opening in American music. It also serves as a symbol for an important current in 20th century music – that of merging popular genres and art music into something wholly new – and as such becomes even more significant through the fact that it wasn’t even in the score when the composer first started rehearsals with the Paul Whiteman Orchestra, before the première in 1924: this particular feature, oozing of smoky jazz clubs, was arrived at in collaboration with the clarinettist of the orchestra.

At the time, Gershwin was was a mere 25 years old, but already a celebrated jazz pianist and songsmith, with a string of hits to his name. Due to a lack of time, he entrusted the orchestration to Ferde Grofé, the regular arranger of Whiteman’s jazz band. The immediate success of the work created a demand for a version for symphony orchestra, however, and for a long time that was the one most usually heard in concert and on disc.

On the present recording, Freddy Kempf and the conductor Andrew Litton – himself a noted soloist in Gershwin’s works for piano and orchestra – have opted for the original orchestration, allowing the musicians of the Bergen Philharmonic Orchestra to revel in the role of a classic American big band.

Following the première of Rhapsody in Blue, Gershwin was commissioned to write a ‘proper’ piano concerto. He did so the following year, this time providing his own orchestration. Also highly successful with its original audience, Concerto in F employed the rhythms, melodic structures and bluesy harmonies of popular music, but its form is resolutely classical.

Also included on the disc are Gershwin’s two remaining works for piano and orchestra, the Second Rhapsody (here in his own, original orchestration) and the infectious Variations on ‘I Got Rhythm’.

There is such a bewildering array of recommendable versions of these evergreen works available on CD, and to some extent even on SACD, that any new recording must offer something special to make its mark in such a crowded field. While some combine one or more of the four concertante works heard here with purely orchestral pieces such as the 'Cuban Overture' or 'An American in Paris', this one conveniently collects all Gershwin's works for piano and orchestra onto one well-filled SACD' and it especially gratifying to have the unfairly neglected 'Second Rhapsody' in such a scintillating performance as that given here.

Over a number of years Andrew Litton has recorded one or more of these works both as conductor and /or soloist, so his command of the idiom is definitely on a par with that of other great Gershwin interpreters, for example André Previn and Leonard Bernstein. He successfully communicates his enthusiasm for this music to the fine players of the Bergen Philharmonic Orchestra, and whether in the bluesy slow movement of the 'Concerto in F' (a terrific sleazy trumpet solo from Martin Winter ) or the 'big band' sound of Grofé's arrangement of 'Rhapsody in Blue', the orchestra performs with a panache that matches that of the finest American orchestras. Håkan Nilsen's fabulous clarinet playing also deserves special mention.

Freddy Kempf gives surprisingly thoughtful and delicate performances of the piano parts in these four works. He plays with a precision and style that also marks his incisive performances of Prokofiev - eschewing mere virtuosity for more lasting musical values. Nevertheless the winning exuberance and often improvisatory style of playing that he displays makes each of these performances something quite special.

The 5.0 BIS recording (96kHz/24 bit) made in the fine acoustic of the Grieghalle in Bergen has both warmth and clarity that we have come to expect from this source. Kempf's Steinway piano is realistically balanced with the orchestra, the surround channels adding just the right degree of ambience to the overall sound picture. In spite of the many competing versions and different couplings of these works to choose from, this new BIS recording - judged both on musical and sonic grounds – deserves the highest recommendation so in the words of Ira Gershwin “ Who could ask for anything more?”