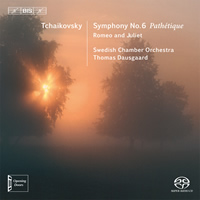 Tchaikovsky:
Symphony No. 6 in B minor Op. 74 "Pathétique"
Romeo and Juliet


These two works from either end of Pyotr Tchaikovsky’s career are linked by their tragic endings – the Sixth Symphony with its concluding Adagio lamentoso descending into the deep and gloomy catacombs of a low string sound, and the ‘Fantasy Overture’ Romeo and Juliet closing with a funeral march. Both of them much-loved staples in the concert halls of the world, they appear here in ‘Opening Doors’ – the series conceived by Thomas Dausgaard and his Swedish Chamber Orchestra in order to provide the opportunity of hearing large-scale Romantic symphonic works in a new way, with the clarity that a chamber orchestra can offer.

Begun in 2006, the Opening Doors project includes a full cycle of Schumann’s symphonies (‘the most perceptive Schumann cycle in over three decades’, International Record Review), Dvořák’s ‘New World Symphony’ (‘yet another orchestral gem’, klassik.com), and Symphony No. 2 by Bruckner (‘perfectly paced and balanced – and the small orchestra is all to the good in making Bruckner's stark originality clear’, BBC Music Magazine). These are now joined by Tchaikovsky’s last symphony – completed only a couple of months before the composer’s death in 1893 – a work which to many is the archetype of a true Romantic symphony.

In the aftermath of the expansion of orchestras for revolutionary new music by Berlioz and Wagner, composers such as Brahms, Dvorak and Tchaikovsky were content still to work with conservatively sized orchestras. They could produce "great effects with small means" as the musicologist Ebenezer Prout pointed out in his book on instrumentation. Nowadays, playing Late Romantic music with suitably augmented chamber orchestras is no longer outlandish, even for Tchaikovsky. Marriner and his Academy of St Martins in the Field put out a complete set of Tchaikovsky Symphonies in 1991 to general approval, and other chamber groups have since explored Late Romantic music too. The benefits of doing this, as noted by critics and general listeners, were more transparent textures, greater prominence for woodwind and greater agility with less inertia from reduced string sections, leading to generally tighter overall ensemble.

Dausgaard's 'Open Doors' series of recordings with the Swedish Chamber Orchestra has taken a hybrid approach in that it seeks to marry mainly modern instrumentation with a few period instruments such as natural trumpets and a number of alleged period performance practices. Controversy still rages about the use of vibrato in the later C19th and early C20th, mainly because the evidence is localised, not definitive and thus open to interpretation. For 'Open Doors' the strings play with little vibrato, but still manage to have a lovely sheen, especially in this recording. Earlier issues in the series carried some inset notes from Dausgaard about his concept of refreshing our understanding of the chosen scores, including what period instruments or playing techniques were used, but beyond the Open Doors logo on the front cover on this disc, I can find no further information - it would have been helpful to know if natural trumpets were still being used.

For simple contextual comparisons, I selected Roger Norrington's RBCD account of the Pathetique with the Stuttgart Radio Symphony Orchestra, which attains what critics have called the “Stuttgart Sound” by combining historically authentic performing practices with the means available to a modern symphony orchestra. It adjusts the configuration of the orchestra, instrumentation, articulation, phrasing and style allegedly to the composer’s own concept of sound. The orchestra generally plays without vibrato and attains faster tempi to remedy the generally admitted notion that performances of Late Romantic music have slowed down considerably since their inception. Norrington's approach is thus quite similar to Dausgaard's 'Open Doors' philosophy, except for the SRSO being a somewhat larger orchestra.

My second comparison illustrates the slowing down aspect. Sergiu Celibidach can be thought of as "Old School" in his approach (and he was the SRSO's first Principal Conductor from 1971). Just looking at the timings for his much admired Pathetique with the Munich PO and comparing them with Dausgaard's is quite illuminating:

Having been somewhat sceptical about 'Open Doors' for Late Romantic works such as Dvorak's 6th and 9th Symphonies, I'm pleased to say that Dausgaard's Pathetique is, for me, a great success. Just as Horst Scholz's insert notes imply, Dausgaard regards Tchaikovsky's 6th as a triumph of symphonic organisation in so vividly presenting the composer's emotions, rather than so often as a mawkish tone-poem. The symphonic inspiration is captured by both conductor and orchestra in an outstanding reading, which is gripping from start to finish. The faster overall tempi in no way impede passages of deep emotion, such as the famous second subject of the first movement, because the composer's intricate and detailed instructions for short-term dynamic and tempo variations are followed precisely. This amounts to written-down rubato.

The unexpectedly explosive tutti chord at the start of the first movement's development made me jump in my chair, and after listening to dozens of Pathetiques without such a shock, that is what I call REAL attack. The following development is brilliantly played, with total commitment and fiery passion; the articulation being so clear that many felicitous counter-tunes and motifs tickle the ears, even at considerable speed. A feature of this recording is its prominent bass line, particularly from the double basses. Tchaikovsky clearly regards this bass part as very important in the Pathetique; he often divides the basses into antiphonic parts, and involves in them a lot of interaction with the cellos too. Given the resonance of the hall in the bass region, the sharp attack and superb articulation of the basses, one is continuously aware of the bass line, without it being mostly covered by the rest of the orchestra, a rather novel experience. Certainly the door has been opened on bass lines here, and in so doing adds greatly to the overall orchestral sound which Dausgaard is obviously striving for.

Dausgaard manages the limpid, broken-backed waltz as a proper 5/4 time signature, i.e. one-two-three one-two, rather than let it sound like an ordinary three in a bar like many other versions. He also brings out the Janus-like nature of this movement; it is both happy and sad at the same time. The so-called March (really in 12/8 time and riddled with triplets) is about open air and lightness at first, fragments of it seeming to fly around endlessly. Gradually, more order takes over, the atmosphere gradually cools as repeated attempts to attain an unseen summit are each defeated. Then the brass enter with the full theme, not in joyful triumph but brilliantly deceiving swagger and braggadocio.

The strings, in particular, carry the finale. With almost no vibrato, they nevertheless have soulful tone and expression, first depicting the composer's deep sorrow, then moving to the second theme which signifies final acceptance of Tchaikovsky's own true nature. The struggle to understand himself seems to be the hidden motivation of the work, never fully disclosed because of his death shortly after the symphony was finished.

Norrington's version is disappointing in comparison. While his open textures similarly allow the details of Tchaikovsky's masterful orchestration to shine through, the players simply lack the commitment and tight ensemble of the SCO. More importantly, he allows much of their phrasing to be very metric and thus wooden. In comparison with the almost spontaneously natural expression of the SCO, the SRSO loose impetus and purpose. As for Celibidach, undoubtedly his reading has been deeply thought and has gravitas, but for my taste the slow tempi, going even slower at points like the second subject in the first movement, seem to congeal and stall, belying any sense of flow and thus obscuring the symphonic development which Tchaikovsky strained for so hard.

Are there any major drawbacks of playing this symphony with a 38 member chamber orchestra? Dausgaard sets himself a real challenge, because the Pathetique has a dynamic range greater than any other of his symphonies, going from pppppp to ffff. The chamber orchestra conductor cannot really achieve this in terms of real decibels, but has to scale the dynamic range so that the relative sound of highest or lowest loudness is felt. I have to say that while the SCO's ff sounded quite normal for any orchestra, going from fff to ffff was not entirely convincing, and I really wished for some extra players at that point (e.g. before the return of the second subject in the first movement). Not really a problem tough, as it only happens for a few bars, but they are climactic. The soft playing, however, is simply beautifully done.

Such a clearly etched orchestral sound needs to have an outstanding recording for capture, and this is very well done by the BIS team, with great realism and warmth, particularly in multichannel. The reverberation of the Örebro Concert Hall is on this outing well-tamed, except for some boom on some bass notes. The Romeo and Juliet track seems to be more recessed, as the strings seem to have more hall reverberance attached than in the symphony, but it responds very well to a volume increase.

I have no hesitation in applauding the SCO and Dausgaard for a truly revelatory reading of Tchaikovsky's Sixth Symphony, and if you are prepared to walk through Open Doors, you will need to add this disc to your collection. It also offers a very good Romeo and Juliet, which although somewhat low key (but very atmospheric) at the start, blazes up to the playing quality of the symphony's first movement in the violence of the last quarter or so.