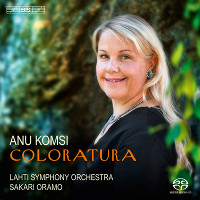 
oloratura – the colouring of a note, a phrase, an entire aria with trills, ornaments, death-defying leaps and dynamic shadings of infinite variety. For more than two centuries, the art of coloratura was a central aspect of the vocal art, and especially of opera, developed largely by the castrato singers at first, and later by generations of star performers and their vocal coaches.

In the mid-nineteenth century this great tradition was all but broken – neither Wagner nor Verdi were prepared to accommodate it in their different brands of music drama, and as both the opera houses and their orchestras grew larger, a different, heavier and more powerful style of singing was favoured. But the fascination and awe inspired by this almost supernatural phenomenon has never died, among audiences, singers or composers.

Anu Komsi, Finland’s ‘coloratura assoluta’, here presents a selection almost as wide-ranging as her own vocal technique, with mad scenes and rage arias from 18th- and 19th-century operas, Alyabyev’s ever-soaring Nightingale and the silvery tinkling of Lakmé’s Bell Song. Later examples of the lengths a singer may be expected to go to are Glière’s glittering (and strikingly anachronistic) Concerto for coloratura and orchestra from 1943, and La Machine de l’être by the composer John Zorn (b. 1953).

Described by Zorn as a monodrama, this 11 minute-long work in three parts received its scenic première in 2011, by Anu Komsi at the New York City Opera. Throughout the programme, Anu Komsi is supported by the Lahti Symphony Orchestra conducted by Sakari Oramo, and in the closing work all involved find themselves on familiar ground in a thoroughly idiomatic performance of Sibelius’ Luonnotar, with its text from the Finnish national epos Kalevala, and a vocal part which is among the most challenging in the literature.

Here is a cleverly contrived album which not only offers entertainment, but also a learning experience. Mikael Strömberg's liner notes amount to an historical over-view of a special type of singing, known as 'coloratura' which came to be adopted by opera singers. It was particularly cultivated by castrati in the early days of opera, and now the purview is of soprano stars with voices which are not just powerful, but possess extreme flexibility and range. Gently taking our hand, Strömberg walks us through the origin of the term, how its definition changed, and how it became a vehicle by which the more extreme emotions of a diva in an opera plot were expressed in florid embellishments. Then he looks at how later usage of the range and technical skill of sopranos moved away from bel canto opera to more striking manifestations, such as music in which the emotions are expressed by voice alone, without texts. He also explores how some composers have shown that the voice can be used, as a natural phenomenon itself, to explore Nature.

Anu Komsi is a Finnish soprano whose international opera career has particularly cultivated coloratura roles. Her musical programme provides examples for the Strömberg historical traversal, although the track list does not place them in full chronological order. At the top of the list comes the winsome Concerto for Coloratura Soprano in F minor, Op. 82 (1943) by Reinhold Glière. A favourite of Dame Joan Hammond ('La Stupenda'), she revelled in the piece's richly romantic melodies as well as executing its ebullient roulades and trills with her crowd-pleasing technique. Comparing this disc's performance by Komsi, however, with one of La Stupenda's, I have to give the palms to Komsi. In the opening Andante, she has much more shading of dynamics and a stronger characterisation of sadness and loneliness, also avoiding Sutherland's slight habit of swooping up to high notes. Komsi holds high, pitch-perfect and sweet Bs and Cs effortlessly at pianissimo level without loss of tone colour, whereas Sutherland tends to go loud as her voice leaps upwards. For the Allegro, where Sutherland is charmingly coquettish, Komsi is the more outrageously flirtatious in her lilting waltz, has great precision in duetting with the flute as a bird, and runs full tilt into the movement's happy climax. One should also note that Oramo and the Lahti SO work splendidly together in providing a glowing accompaniment, wherein the clarinet and flute soloists should be congratulated on their empathy and rapport with Komsi's coloratura.

Delibes gives a fine example of coloratura being written after its heyday in the later C19th. His opera Lakmé tells the story of a Brahmin Priestess of that name. In the Bell Song in Act II, the soprano opens with a solo cadenza of some complexity and florid decoration, while in an episode when bells are rung, she imitates them to great effect. Another crowd-pleaser, from earlier Romantic opera is the "Mad Scene", of which the example given is from Ambroise Thomas' Hamlet, Act V. Ophelia, hearing of her father's murder by Hamlet has a soliloquy which passes from denial through anger to despair in her grief, causing her later to die in an off-stage drowning. The Ophelia character suddenly turns from singing a normal aria to pouring out a torrent of coloratura fireworks, which Komsi responds to spectacularly in the gripping scene as her character's personality breaks down tragically.

Mozart's 'Aria of the Queen of the Nigh't from the Magic Flute is a barnstorming show stopper, featuring coloratura writing of formidable difficulty which would challenge any soprano voice. Aided by Oramo and the orchestra, Komsi has a swifter take than usual, burning with nervous tension as she is forcefully bent on vengeance and so vocally lets rip with her twisted emotions.

Two examples of nature-related coloratura are presented. Not often heard, Alexander Alyabyev (1887-1851) composed a song about the Nightingale which is here orchestrated by Koskimies. In Russian folk style, it alternates fast and slow sections, and in two stanzas features a charming ode to a Nightingale from a sleepless and love-lorn singer. Marvel at Konsi's control and accuracy as her big leaps hit the target with perfect pitch without overemphasis, and relish the shear panache of the final bars.

Nature itself is the feature of Sibelius' great masterpiece Luonnotar (The Nature Spirit) Op.70. Taking its texts from the first book of the Kaleva, Finland's repository of deep history, it describes the Finnish Creation Myth. One of the composer's most subtle and austere works, with a fiendishly difficult soprano solo, it has a modernism of harmony and texture far in advance of its time. Komsi does a fine job, with sterling support from veteran Sibelians Oramo and the Lahti SO, but her soft consonants blur her articulation, and thus rather dulls the impact of the speech rhythms of the Kalevala poetry. If you are looking for Luonnotar in particular, I suggest that Isokoski's much more dramatic and sharply depicted version by Soile Isokoski (Sibelius: Luonnotar, Orchestral Songs - Soile Isokoski) is the one to go for.

Composers are still using coloratura, as John Zorn (b. 1953) demonstrates in his La Machine de Étre. This is a three movement monodrama in which the voice is wordless but through singing and some vocalisations demonstrates that a wide range of emotions can be expressed in this way. The idiom is close to that of Berg, with dissonant, atonal dabs and bursts of colour emanating from orchestral instruments in chamber fashion, rather than as full orchestral tutti. The vocal line keens and moves seemingly spontaneously, requiring a whole range of techniques not normally found in the world of opera, yet transmitted by Komsi as if they were. There is some cackling laughter and odd vocalisations, especially in the last movement, which is brash, turbulent and disordered, with huge raspberries from the heavy brass. The work ends with a blood-curdling scream from the soprano.

Komsi's vocal mastery in performance apart, this piece shows off BIS' exemplary recording of the Lahti Orchestra in their timbered Sibelius Hall, where an acoustically well-adjusted ambience clearly pinpoints each instrumental group in good depth perspective. The voice is not too near (although several times Komsi's uppermost register can be heard to carry a very high frequency edge when fleetingly under pressure), and she appears fully in the same ambience as the orchestra; indeed one can hear her turning to ping notes out into the ambience in a particular direction for effect. This technique was also often used by Joan Sutherland.

Anu Komsi's voice is undoubtedly beautiful, with a superbly controlled and naturally produced technique, as this showcase-like programme sets out to illustrate. But this BIS issue is not only hugely entertaining but very informative and insightful in the way it allows easy comparisons to be made between different genres of coloratura, so I have no hesitation in highly recommending it.