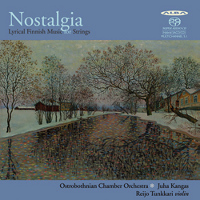 The Ostrobothnian Chamber Orchestra is one of the finest on the world stage. Proud of its versatility, it specialises in Finnish string music not only from the late C19th and early C20th, but also applies its virtuosic qualities to modern and contemporary compositions for the medium. A major feature of the orchestra's programmes and recordings since its inception in 1972 has been its compilations of 'occasional music' in the Finnish Romantic National style, which have not only been widely popular but have materially influenced the orchestra's sound.

For this disc, Juha Kangas, the orchestra's founder and long-term Honorary Conductor, presents a nostalgic line-up of stalwarts of the Romantic period such as Jan Sibelius, Robert Kajanus (also a prominent international conductor and champion of Finnish music), Armas Järnefelt, Erkki Melarin, Leevi Madetoja, and Toivo Kuula. Their pieces are mingled with those from a younger generation such as Aarre Merikanto, Väinö Raitio and Uno Klami with their respective more advanced harmonic and rhythmic styles. In effect, this is a musical history for the OBO itself.

Most of these short, jewel-like pieces are rarely heard; only the Sibelius Impromptu, Op. 5/5-6 and Romance in C appear frequently as fill-ups in recordings. The intensely lyrical content of this music is frequently tempered by a vein of sadness, reflecting the nature of the Finnish psyche. Each composer also has a distinctive way of writing for strings, some direct and texturally simple, others multi-layered and satisfyingly complex, so there is plenty of variety shared between the 16 tracks.

In five of the pieces, the OBO's leader, Reiho Tunkkari, plays a prominent solo part, his burnished depth of tone in a number of passages on the G string being a particular delight. Toivo Kuula's "Song without Words" also features a cello solo and starry glockenspiel notes, another distinctive texture which tickles the ear.

While the orchestra perform with their customary deeply felt and lovingly played style, the engineer has produced a very fine sense of the listener being present at the Snellman Hall, Kokkola. A warm ambience graces the realistically immediate sound from the orchestra, who, as usual, sound like a very much larger body. The bass is deep and well articulated, each department is easily located and Kangas' careful control of dynamics from the faintest hush to a resounding fortissimo is clearly captured. As usual, the multi-channel track has a 3-D touch which considerably adds to the listening experience.

Alba's liner notes are well set out in English and Finnish, offering a few sentences about each track, and often give an interesting anecdote about its context or reveal the conductor and orchestra of its first appearance on the concert platform - another form of nostalgia.

For those collectors who already have all of the Ostrobothnian's previous compilations of short pieces for string orchestra, this will be an automatic purchase. If, however, you have not yet heard this wonderful orchestra's talented way of elevating the stature and entertainment value of "bon-bons", this one would be a fine introduction.

For sheer beguiling musical pleasure, completely committed playing and excellent recording, this is an album not to be missed.