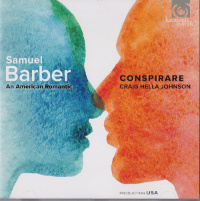 
Samuel Barber's lyrical melodies and unabashed romanticism have earned him a cherished place in the pantheon of 20th-century composers. Recorded here are some of Barber's finest works for choir (including the world-beloved Agnus Dei) alongside 2 world premières: a new version for chamber chorus and orchestra of Barber's anguished work The Lovers on poetry by Pablo Neruda, and a new version of Easter Chorale, which were both made by Robert Kyr for Craig Hella Johnson and Conspirare.

Barber was a versatile composer, leaving a work-list covering most of the usual genres of music. Although not the most numerous in his canon, choral works were obviously important to him, as he took the trouble to transform some of his songs into choral pieces. For this disc, Craig Halla Johnson, conductor and artistic director of the Emmy Nominated mixed-voice chorus Conspirare, has selected a very representative collection of Barber's choral works. The album also introduces two new arrangements of larger scale works for solos, chorus and large orchestra. As a whole, the programme gives us a good feel for Barber's persistence with a basically Romantic style long after most other composers had abandoned it. Despite constant criticism of his "out of touch" idiom, Barber persisted because his music dealt with primal emotions, and this was what audiences still demanded. Hence his continued popularity and public appeal.

Craig Halla Johnson evidently recognised a theme running thorough much of Barber's output for choirs, that of death and dying. This is not surprising; like many other composers Barber had inner conflicts and a complex personality, and also suffered from the breakup of his long-term relationship with Gian Carlo Menotti, which aggravated a slide into alcoholism. As with Schubert, Barber's choices of poetry for song settings were made with great care. Some selected poems might seem fairly trivial to average reader/listeners, but Barber himself felt something deeper in such texts, ennobling them through his eloquent and masterful musical amplification.

As an example, Conspirare begin with the a cappella 'Twelfth Night', a five verse poem by Laurie Lee describing the prospect of hard winter arriving at the time of the Epiphany. Barber doesn't miss a trick in vocal word-painting, with rich and varied harmonies (dissonant when describing the harshness of the season), set in a fluidly expressed through-composed structure. Excitement begins to stir as the pilgrim kings are envisaged closing in on the new-born Child's hidden location, then mystically the earth is seen to warm and glow as the shepherds look to the signs in the dark sky, finding the 'turning' star, where the choral lines open up and intensify. The final verse concerns the birth of the saviour, and finally all the voices come together, making a radiantly saturated sound at the lines 'The sun of heaven, And the son of God', triumphantly delivered, then falling softly into awed repetitions of 'the son of God'.

Another unusual poem from Barber's selection is 'The Virgin Martyrs' by Helen Waddell, based on the ancient Latin of Sigebert of Gembloux. It consists of a list of maiden's names, who were, evidently, virgin martyrs "worthy now of God's company". Barber affords these scraps of text tenderness, respect and sympathy, setting the poem for an angelic-sounding women's chorus in winding polyphony. Most touchingly, the last line deals with their gifts of flowers, including "Lilies and violets for love", the last word harmonised gorgeously and gently fading into silence.

Amongst the pieces dealing with death, there are various approaches and treatments which display Barber's complex feelings about the subject. A remarkable example is 'A Stopwatch and an Ordnance Map' to words by Stephen Spender. Written in 1940, this work sets a lament for one of the fallen in the Spanish Civil War (the mention of olive trees at the end of each stanza gives a clue). Barber's scoring for male chorus accompanied by three timpani sets an appropriately wartime feeling. A loud fusillade from the drums precedes the entrance of the chorus, and a constant marching rhythm underscores the first stanza. The second is more static as a comrade watches helplessly as his fallen friend lies out of reach under enemy fire, the bare-stranded music dwelling on the bitterness of war. In the third stanza, the marching rhythm returns but is overcome by the inexorable lament of the voices, which depict the living comrade's eternal memories in polyphonic style. A striking piece, performed with chilling effect by Conspirare's male singers.

No programme of Barber's choir music could be without his Agnus Dei, set to the music which originated in 1936 as the second movement of his first string quartet. Almost immediately re-scored for a string orchestra, the Adagio for Strings has become a world-wide phenomenon, an iconic piece of music for expressing grief at many state or national mourning ceremonies. Barber's re-arrangement to a choral ritual of the Catholic Mass could have been designed to deflect the Adagio's sombre usage. Conspirare perform it at a flowing pace, without a trace of sentimentality, spiralling up to a vocally pure soaring climax. This performance finally convinced me that Barber's choral setting really could work, so attached have I been to the simple Quartet movement and string orchestral versions.

Nicely balancing the programme, there are pieces about life too, always with insights brought into view by Barber's intuition. Finally, there are two major new items, 'The Lovers' and 'Easter Chorale', which were originally for soloist, chorus and large orchestra. A long-time collaborator with Conspirare, Robert Kyr, crafted new chamber orchestrations in the hope that this may give both pieces a greater concert presence, being more playable and affordable. Kyr tells us in the notes that he has not changed a single note or rhythm of Barber's vocals, but the instrumental music of 'The Lovers' was radically cut down from an 80-piece orchestra to a fifteen-player chamber orchestra. It is, therefore, effectively a new work. 'Easter Chorale' (commissioned for the dedication of the massive central tower of the National Cathedral in 1964 has also been re-arranged. It was originally composed for brass organ and timpani, before Barber added the choral parts from a Pack Browning text. Kyr has now added a chamber music orchestration for the same instruments as 'The Lovers'

'The Lovers' is probably the emotional heart of this programme. It emerged at the time Barber was breaking up with Menotti (1969-71), using texts by the Chilean national poet Pablo Neruda, which vividly deal with passionate despair. Barber's setting is one of highly-charged eroticism and sensuality, encompassing both love and loss, expressed by the richly resonant baritone of choir member David Farwig and expanded by the chorus. Now, thanks to Kyr, they are vested with solo and small ensemble groups interweaving and underpinning the vocal drama. The new arrangement works very well, and given such a committed performance, one may hope that 'The Lovers' will be more frequently performed by gifted amateur choirs.

This issue comes in a sleeve which contains the disc and a very substantial booklet, numbering 59 pages, beautifully printed on expensive paper in good-sized fonts with colour and black and white illustrations. Joshua Shank provides informative paragraphs about each work in English, French and German (the texts are printed in the same languages with good translations). Harmonia Mundi's recording is exemplary in both stereo and multichannel modes, having been made on the stage of Sauder Concert Hall, Goshen College, Indiana as shown in a session photo. This positioning gives plenty of air for the voices to expand into, without any detail-muddying reverberation.

Conspirare took this programme on tour, and evidently not only assimilated it technically but also became enormously enthusiastic about Barber's choral works. Their dynamic range is formidable; for only 36 voices they produce open-voiced climaxes which are truly thrilling, and singing in pianissimo they maintain the same richness of tone. I do, however, wish they would articulate their consonants more crisply. If I lost my place when following the text, it was difficult to catch up.

This new compilation compliments and considerably extends the fine Naxos RBCD of Barber's choral pieces. No doubt, however, that 'An American Romantic' is an important entry into Barber's discography, particularly with its HD sonics. It is superbly performed, realistically recorded and presents music which charms, informs, disturbs, amuses and elevates the spirit. Unmissable.