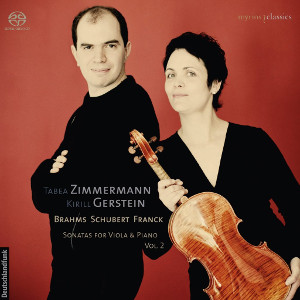 This is superb stuff!

Julia Fisher, asked how she manages to play so very well in tune, replied that she always listens to what she is playing. She was not suggesting that some simply put their fingers in the required position, hoping that a fair amount of vibrato will make it sound right, but her remark makes sense to me because her intonation is always spot-on.

Studies show that many people don’t hear small differences in tone, and one may wonder if those who do are better off. I, for one, seem to be more sensitive than others, especially with period violinists using no vibrato at all. As for the viola, I am aware that playing in tune is all the more difficult and that there are only a few who are able to do so without too much vibrato. Tabea Zimmermann tops my list of those 'who can’. Listening to her is pure delight.

But that, of course, is not all that matters. Playing in tune is one thing, putting a soul into it, is yet another. And yes, once again, she tops my list there, too! I cannot remember having heard Brahms first clarinet sonata (op. 120/1) in its viola transcription played any better than on this disk. Tabea Zimmermann is able to share with us Brahms’s ‘end of life’ emotions in such a way that you ‘feel’ his thoughts moving back and forth between memories of long life and the inescapability of death.

Her approach is mature and well thought through. She allows detail to be better exposed by not rushing too much through the score. Her tone is pure and with as little vibrato as possible. Her partner in this ‘musical conspiracy’, Kirill Gerstein, whom I had not heard before, takes his full share and on an equal footing.

This sonata alone is already reason enough to warmly welcome and recommend this disk.

There is, however, much more to enjoy: Schubert’s somewhat melancholic sonata for Arpeggione in its viola version (when this sonata was published, Schubert was already long dead and the hybrid ‘guitar-cello’ had completely disappeared from the music scene; but in its first edition there were parts for violin and cello, and later on, viola), and César Franck’s famous violin sonata in a hardly known viola version. Both of these are ‘end of life’ compositions as well.

As for Schubert: Comparing Tabea Zimmerman/Kirill Gerstein with Misha Maisky/Martha Argerich (Philips, 1984), by no means a bad version (with cello), it becomes apparent that Tabea not only has more ‘presence’, but is also full of life, with beautiful, almost sensuous phrasing. (Some of it can no doubt be attributed to differences in the recording).

César Franck authorized a cello transcription (Jules Delsart), but none of the others, like this one for viola. (There are versions for: flute, alto sax, tuba, and it seems that there is even one for violin and orchestra). The notes are not very clear as to whom transcribed the violin part for the viola, although from a separate discussion it would seem that it was Tabea Zimmermann herself in an effort to ‘conquer the piece for the viola’. (There are other transcription references: Klav Va, edited by Felix Schwartz, and Patrick Loiseleur, published by Tamino Productions).

Here, too, Tabea Zimmermann surprises with her beautiful and highly talented playing, shedding new and attractive light on this sonata, and for me, there is no doubt that it is ‘mission accomplished’ to conquer this sonata for the viola.

I will refrain from further complimenting this exceptional achievement by Zimmermann/Gerstein, adding nonetheless a remark on the outstanding quality of the recording and surround mastering.

Since volume 1 (with the other Brahms sonata) had escaped my attention, I ordered it straight away! 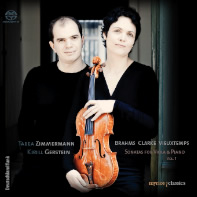