That's about it Kal. There are no catalogues of prices of OOP SACD as far as I know. e-Bay would seem to be the best place to advertise, suggest a price and consider offers. ... 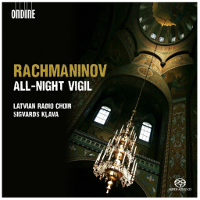 Inspired by the words, music and atmosphere of Russian Orthodox worship, Rachmaninov created with his Liturgy of St John Chrysostom (ODE 1151-5) and his All-Night Vigil two supreme examples of choral writing but also music of uplifting spiritual strength.

As instruments are being proscribed by Church law, the All-Night Vigil is composed for unaccompanied voices but Rachmaninov created a work of such richness that could be described as "choral orchestration". Dividing the chorus often up into eight parts and requiring a wide vocal range of the singers, Rachmaninov was asked: "Where on earth are we going to find such basses? They are as rare as asparagus at Christmas." But Rachmaninov knew well that, in Russian choirs, asparagus is available all year round.

The Latvian Radio Choir is regarded as one of the top professional chamber choirs in Europe. The repertoire extends from the Renaissance to the present day, and its main focus is on exploring the capabilities of the human voice and seeking to push its limits.

Sigvards Kļava, Chief Conductor and Artistic Director of the Latvian Radio Choir since 1992, is one of Latvia's most prolific choral conductors. Apart of the standard repertoire he has conducted most premières of new choral works by Latvian composers.

"The highest artistic achievements in the realm of Russian church music". Praise indeed from a Russian musicologist for Rachmaninov's two masterpieces for unaccompanied choir. The Liturgy of St John Chrysostom Op. 31 (1912) and The All-Night Vigil Op. 37 (1915) are not the masterpieces of a pious composer, but one who from childhood loved the music of Russian church bells and monastery chants. Rachmaninov was probably also attracted by the tendency of Orthodox worship to be imbued with emotion; he generously supplied some of his most moving melodies and wielded a sure hand in the craft of word painting in vocal works.

Sigvards Klava's wonderful performance of Rachmaninov's Liturgy, with his Latvian Radio Choir (Rachmaninov: Liturgy of St John Chrysostom - Klava), is now joined by the All Night Vigil. Having made over 20 CD recordings together, the Latvian Radio Choir is now one of the top professional chamber choirs in Europe. And professionals really are needed for Rachmaninov's complex and challenging 8 part scores. The requirement is for sopranos with sweet but powerful voices and great range, altos with warm-tonedviola-like presence, tenors with golden, ringing voices and much stamina, and basses with big enough chests to become bassi profundi and sing a B flat two octaves below middle C. Above all, the chorus needs precision, not something that Russian choirs were noted for. As well as having superb breathing control for long held passages, the singers need to be able to turn on a sixpence as it were, to obey Rachmaninov's excitingly sudden changes of dynamic or rhythmic pattern. All of these features, and more, are revealed on the new recording.

According to the composer, the All-Night Vigil was written in less than two weeks, although its perfection of style surely was the result of careful thought over long period. Fine though the Liturgy of St John is, the All-Night Vigil marks a compositional advance, its choral writing having a freedom and conveying a depth of feeling that perhaps explains its immediate success with the wartime Russian public. In a performance such as that by the Latvian Radio Choir on this disc, the Vigil still has the power to capture even our own media-drenched hearts.

Rachmaninov set the Service, which is usually sung at Festival times, with only the parts of texts which were always heard, not those which varied weekly. He also allowed for some of the ecclesiastical chants to preface some movements, so that in concert (or recordings) the flavour of a church performance comes over. Klava duly introduces some of the soloists to dramatically intone the Znamenny Chants; an impressively stern bass and heroic tenor playing the parts. This provides enough atmosphere so that the listener can imagine being present at an Orthodox service, in the half-lit spaces of a large church, with flickering candles reflecting from golden icons.

Rachmaninov's magical mixture of ancient chants, Russian and Greek, hints of Russian folk songs, the sound of bells of various sizes and functions and his own rich tapestry of melody is a heady experience, especially in such a passionate and vibrant performance. The composer's rapid changes of dynamic are thrilling, from the gentlest soft cushion of sound to a powerful climax which sounds as if the roof had vanished, letting holy light pour in. The deep bass voices are frequently heard anchoring the bass lines, and their final bars in the Nunc Dimittis have them singing a slow downward scale on a diminuendo down to the famous B flat. This is done without any loss of their resonant, sonorous tone, bringing up the hairs on one's neck.

Ondine's excellent recording recording of the Liturgy was made in the vast dome of Riga's Cathedral, but here in St John's Church, Riga the engineers have found a venue with a most accommodating ambience. The essential feeling of space is preserved, but the sheer presence of the choir is commanding. Although each department blends very well, one can still hear individual voice timbres, adding character to the singing - much as Stokowski encouraged his violins to bow and play as each musician wished, providing a uniquely rich and colourful sound. Some of the singers, especially the canon priest chanters, move forward and backwards in the acoustic, while Rachmaninov's intricate parts are amazingly transparent, so the textures can be heard without effort. The 5.0 track has the most vivid capture, but the stereo, especially at a decent volume, is also delectable.

It is very pleasing to welcome the return of SA-CD recording by Ondine. Such a fine performance deserve the best recording, showing how well high-resolution can engender fidelity. I hope this will not be a one-off. Make no mistake, this is a glorious All-Night Vigil, not to be missed. 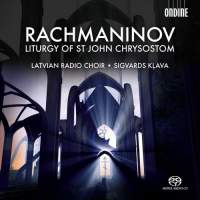