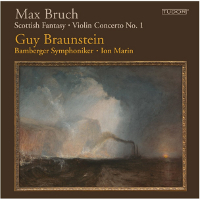 To orchestral devotees, Guy Braunstein will be well known as one of the 3 1st Concertmasters of the Berliner Philharmoniker, a post he has held since September 2000. At the close of this season however he returns to his soloist roots (his first contact with the Berliner's was as soloist in Beethoven's triple concerto) and this disc marks the start of that return. Braunstein only accompanied Bruch once in his tenure, the two concerts that formed the basis of the Bruch part of Mendelssohn, Bruch: Violin Concertos - Midori (although the Berliner's have performed it more recently, Braunstein seems to have had the night off!) and one can safely say he did not agree with how Midori tackled it "head on" at all!

Like Bruch: Violin Concerto No. 1 - Gluzman, Litton, Midori frequently pays scant regard to Bruch's markings; one clear example is the end of the second solo in the first movement - the score says the top G should be pianissimo, Midori & Gluzman yell "crescendo!" In the remainder though, Gluzman is closer in his refinement to Braunstein than Midori who, politely, "takes no prisoners" in the chords. The very fine notes make it clear that much of Bruch's output, this concerto in particular, was written in tribute to Mendelssohn (if one looks at much of the solo line, the aptness of pairing the two concertos becomes obvious) but few imbue the solo or orchestral line with that feeling as Braunstein, Ion Marin and the Bamberger Symphoniker do here.

As one might expect, Guy Braunstein takes an enormous amount of care to ensure the orchestral lines are phrased as his solos. There is no lack of passion from any protagonist but it is a reading viewed looking back at Mendelssohn not sideways to Wagner, let alone Richard Strauss, so when the central climax of the slow movement arrives Eine Alpensinfonie is not at the forefront of the listeners mind as it perhaps was when Karajan addressed the score. The golden simplicity of his tone in the coda is a joy. The finale is on the slow side of normal but the response of all concerned (woodwind especially are outstanding here) certainly lives up to the "energico" marking if one considers it a character instruction as opposed to speed indication. Certainly at this slightly more moderate tempo, the allusions to Mendelssohn's own concerto become more clear than the usual dash-to-the-finish-line that others in the past have put down on disc (Gluzman and Midori are not guilty of this either).

Opening the disc is Bruch's Scottish Fantasy which is dedicated to Sarasate, thus meriting a more overtly virtuoso display. Braunstein delivers this in spades without ever sacrificing his golden tone and is far more volatile than in the more famous concerto. Here, more crucially than elsewhere on this disc, Ion Marin & the Bamberger Symphoniker evoke the very different moods with aplomb, never letting themselves be "mere" accompanists to Braunsteins golden thread. As a touching encore, Braunstein himself arranged both the solo and orchestral parts from Bruch's Romanze for Viola & Orchestra and plays with a disarming simplicity. How to sum up? Well, if one detests the Thielemann and Barenboim school of conducting the late Classical/early Romantic German repertoire, this account will probably go down rather well (and conversely).

The sound from Tudor is as per normal; richness favoured over absolute clarity (although everything is audible, at times the ears have to work harder than from other venues) but still enormously enjoyable.

Well, as the orchestra of soloists loses a star, we gain one. It will be fascinating (and I hope, enjoyable) to compare this disc with Bruch, Chausson, Korngold: Violin Concertos - Steinbacher.

I'd give this one a great big thumbs up, if it weren't for the clearly audible sniffing of the soloist.