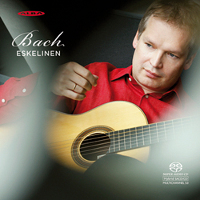 Four of Bach's Suites for solo Violin/Lute/Guitar are some of the most controversial works of the master, in terms of their instrumentation and origin. Indeed, for about a hundred years, these Suites, together with several other solo works, were regarded as being his collection of works for the Lute - “The Lute Suites of Bach”. Possibly, this was because of Wilhelm Friedemann Bach's introduction to his father of the top lutenist of his day, Sylvius Leopold Weiss. However, the scores are not manuscripts by JSB but copies for other instruments, in particular harpsichord and violin. Movements from some of the copied favourite scores are even found in Bach's church music.

To avoid relating the lengthy confections of many musicologists (which are still in process), I will simply outline the current favourite scholarly beliefs about the Suites BWV 995-1000, BWV 1006a. Bach had an instrument of which he was very fond, it was even custom-built; the "Lautenclavicymbel". According to contemporary accounts, even the simplest of versions of it made a sound that could deceive a professional lutenist, a fact considered almost miraculous at the time. Bach had two of these Lute-Harpsichords; they resembled a small wing-shaped, one-manual harpsichord of the usual kind and had gut strings. Despite BWV 995-1000 & BWV 1006a being assigned to a harpsichord by Bach-Werke-Verzeichnis (Bach Works Catalogue), there are some indications that the scores of the Suites in question were prepared for a Lautenclavicymbel (now almost an extinct instrument).

In the informative booklet to his SACD, Finnish guitarist Iso Eskelinen gives us a sanguine account of the "Lute Suites of Bach" becoming "Guitar Suites of Bach" during the middle of last century. Andrés Segovia was the first to be regarded as doyen of the classical guitar group, and realised that the Bach scores required modifications to help his guitar sound more like a lute. In 1975, Australian guitarist, John Williams, issued a recording entitled "The Four Lute Suites". This became the apogee of the "Lute Suites of Bach" portrayal for record collectors.

Eskelinen explains that changes of the Bach copy scores are required in order to give a guitar its characteristic sounds. For example, the Suite in E major is "an extremely unlikely key for a Baroque lute", while the E major key suites the guitar very well. In order to overcome the fact that Bach's texture still poses plenty of challenges, guitarists therefore require to make some changes of notes in pitch or position. In the case of the Suite in G minor (which is a copy from the Cello Suite No. 5 in C minor), Eskelinen, like other guitarists, changes the key to A minor to make the guitar account for the low notes compared to the cello. He also plays a 6-string guitar to give the music a richer base than the "standard" 5 string guitars. To be honest about his changes, the back page of the booklet and the back of the SACD have the statement "All arrangements for guitar by Ismo Eskelinen".

My immediate thought when hearing Eskelinen's first notes was "clarity". This results from a clear technical control of his instrument, using every resource to bring the most from the various movements in the baroque works in each Suite. Eskelinen is also superb in expressing the character of each movement. He is also is a master of Bach's 2-line notation, making the composer's alternation of melodic lines sound like conversations of various intensities. Sometimes, one can even believe that the music has become polyphonic. In order to obtain this effect, he uses subtle changes in dynamics and tonal colours, from which the "character" emerges, and he also adds tasteful, attractive ornaments, reminding the listener of the baroque attributes for the suites.

As well as the two Suites, there are two fillers in the programme. Bach composed Ciaccona sometime between 1718 and 1720 as the final movement of the composer's Partita No. 2 in D minor. Yehudi Menuhin called the piece "the greatest structure for solo violin that exists" and it has high regard from players of just about every instrument, for example Brahms (left-hand piano) and Segovia (guitar). Eskelinen borrows some of Segovia's ideas in his own arrangement, which is fascinating and dramatic; its opening is determined and stern, which dissolves into dazzling articulation with roving harmonics. Apparently there are some chorale melodies which appear in Bach's original MS, and Eskelinen thoughtfully arranged a guitar part with the chorale 'Christ Lag in Todesbanden BWV 277' to make a contemplative Prelude to the energetic Ciaccona.

Simon Fox-Gál is a much in demand for supervising recordings, and even if there is are no details of the type of recording mentioned in Alba's presentation, the result is very fine indeed; a little closer than usual for the guitar, this probably to accommodate Eskelinen playing on the stage of Snellman Hall, Kokkole, Finland which is frequently used for opera. There is a helpful resonance around Eskelinen, and the body of his guitar is given a rich after-playing sound which dies away smoothly.

Born in 1971 in Finland, Ismo Eskelinen obviously has a very determined character and is most attractive in his musicianship. I need mention only a few of his activities to indicate this:- playing at venues such as the Berlin Philharmonic, Concertgebouw Amsterdam, the Royal Festival Hall, the Théâtre de la Monnaie, Finlandia Hall and the Sibelius Hall; he is extremely popular on music festivals all over the world; he appeared weekly in a popular current events programme on Finland’s main TV channel reaching up to 500,000 viewers every week; and finally making successful albums for Ondine and Alba. Yet he finds time to be teacher at the Sibelius-Academy in Helsinki!

This recital grabbed my attention immediately and held me with the fascinating flow of magnificent Bach right until the end. Even if you already have copies by Segovia and John Williams with the 'Lute suites of Bach' on their guitars, I strongly suggest you try Ismo Eskelinen's Bach; another disc of the Bach has followed, and I look forward to it.

* http://www.thisisclassicalguitar.com/bachs-lute-suites-clive-titmuss/
This is a through and detailed account about Bach, the Lute and the guitar. 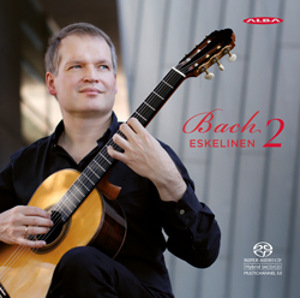