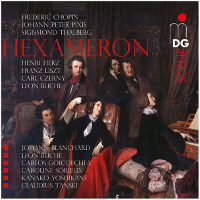 
Top Billing
It was billed as a battle of titans. Franz Liszt had invited the leading pianists of his time to compose variations on Bellini’s “March of the Huguenots.” The international keyboard stars Chopin, Thalberg, Pixis, Czerny, and Herz had agreed to compete, but they never actually performed together in Princess Beliojoso’s Paris salon. Claudius Tanski has now recreated this event with his master pupils. Unlike Liszt 175 years ago, he collaborates on equal terms with this circle of brilliant young stars emulating their immortal models with sovereignty and grandeur.

Best and Brightest
The aim behind Liszt’s extraordinary project was to display the piano at its best and with all its potential. And his fellow composers did not disappoint him: much here belongs to the best that these authors ever committed to paper. We find breathtaking cascades, chords towering up to heaven, and absolutely wild keyboard acrobatics. Chopin’s “Largo,” just prior to the end of the cycle, however, suggests absolutely supernatural modesty; and Liszt, whose greatest virtuosic successes were already behind him, opens the door just enough to let in an inkling of the impressionistic harmonies that would mark his late oeuvre.

Varied and Vibrant
Claudius Tanski himself was able to win a wide range of artistic personalities for his project. Johann Blanchard, Leon Buche, Carlos Goicoechea, Caroline Sorieux, and Kanako Yoshikane present the “Hexameron” with vibrant virtuosity and a profound and nuanced understanding of the individual qualities of the variations, which are also reflected in the supplemental compositions. Leon Buche dares to engage in a tightrope act: in his sumptuous “Elegy” he quite naturally combines motifs from the “Hexameron” with Serge Gainsbourgh’s “Je t’aime.”

Historic Moment
It is hardly surprising that the salon performance never materialized – Liszt’s insistence on the leadership role stood in the way. And now the sweepstakes question: Who is the best? You can play judge and jury while listening to this recording in 2+2+2 multichannel technique and with a Steinway concert grand piano in top form. Need a precedent? Perhaps the Princess’s diplomatic and Solomonic judgment during a little summit meeting will be of help: Thalberg was the first, and Liszt was the one and only. So here it is now: a historic moment in multigenre pianistic virtuosity in all its glory!

A wonderful disc of the like that features rarely on disc and even less frequently in the concert hall performed with astonishing vitality by all concerned.

Hexameron, the main work on this disc, is the product of Liszt, Chopin, Thalberg, Pixis, Herz and Czerny who were challenged by Liszt to write a series of variations (a la Diabelli) in preparation for a virtuoso competition of the above pianists (it never happened for better or worse). Lizst himself composed the introduction, theme (the March of the Puritans from Bellini's I Puritani), second variation, finale and ritornellos to the variations of Pixis (3rd variation), Czerny (5th) & Chopin (6th); Thalberg composed the first, Herz the fourth. The remainder of the disc is filled with music from those supplying the variations and a piece inspired by Hexameron from one of the pianists, Leon Buche.

The actual performance of Hexameron is something to behold. There is no small amount virtuosity on display both of the quiet kind (in the Chopin) and in varying displays of technical prowess elsewhere. The recording here was inspired by Werner Dabringhaus attending a concert in Berlin in which these performers divided the pianistic spoils between them; they do here as well to great effect. The introduction is performed by Claudius Tanski & Johann Blanchard; Leon Buche the theme; Carlos Goicoechea variation 1; Caroline Sorieux var. 2; Leon Buche var. 3 & Kanako Yoshikane the ritornello, var. 4; Goicoechea var. 5, Buche rit.; Sorieux var. 6 & rit; Buche, Blanchard & Goicoechea the finale. In Berlin they had the advantage of 2 pianos; here they had the challenge of maintaining the flow of the music with only one instrument - Werner Dabringhaus was so captivated he immediately wanted to record it as a concert and so meticuclous plans were needed to keep it "true and believable". It most certainly is & all produce thrilling playing & as Dabringhaus asks "And is it not amazing to hear the different characters of the players just like one would imagine the different characters of the composers?" It is & it evokes the meeting that never was.

After this, each of Tanski's proteges is given some welcome space to perform solo works. Caroline Sorieux performs Chopin's Mazurka Op. 17 No. 4 & Nocturne Op. 55 No. 1 which comes as welcome simplicity against the torrent of notes that many of the other pieces include! Kanako Yoshikane performs Czerny's variations on Schubert's Sehnsucht waltz; a trifle musically but neither over- or under-played here. Carlos Goicoechea tackles Thalberg's Nocturne and for all his advocacy, it is not hard to see why Thalberg's reputation largely remains as a performer today when compared to Chopins output in the same genre. Claudius Tanski returns to perform Herz's free transcription form Rossini's William Tell (not the overture) & a Pixis Waltz; as with Thalberg, Herz & Pixis are remembered as performers first, composers second with reason. Johann Blanchard plays the most substantial fare outside Hexameron, Liszt's Funeraillles - a performance that is full of passion & gripping from beginning to end. To complete the disc, Leon Buche gives a quasi-improvisatory response to Hexameron which is startlingly impressionistic after all the high Romanticism previously heard.

The sound is wonderful, the piano is placed perfectly so that one never hears any of the action, just wonderfully rounded tone set in a perfectly sized, believable acoustic. The piano itself is a 1901 Steinway and has lost some of the characteristic brilliance that is associated with the manufacturers resonance without any degree of clarity. It sounds like a blend between a Bosendorfer & new Steinway and is utterly sympathetic in character to the music.