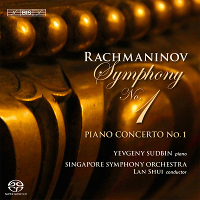 
Completed in 1891 and 1895 respectively, the Piano Concerto No.1 and the D minor Symphony were Sergei Rachmaninov’s first large-scale orchestral compositions, written by a young man still in his early 20s. The composer, whose self-critical vein was evident from the start, almost immediately decided to revise the concerto, even though he did choose to perform it in its original form when he made his London début as a pianist in 1899.

Two years earlier, the symphony had been premièred, an event which has become notorious as one of music’s great disasters: the rehearsal time had been completely inadequate, and Glazunov, who conducted the work, was less than sympathetic to it – and may also have been drunk during the performance. The scathing reception caused Rachmaninov to doubt not only the quality of the work, but his own gifts as a composer, and he didn’t write anything of importance for three years.

In 1917, he did revise the piano concerto, making use of the experience gained from having in the meantime composed the immensely successful 2nd and 3rd piano concertos and performing them numerous times himself. Rachmaninov also repeatedly expressed the wish to return to his first symphony, but the score was lost in the upheavals of the Russian revolution and the composer's move to the USA.

Not until after his death in 1943 was a set of the original orchestral parts rediscovered. That Rachmaninov never forgot the work is however proven by the fact that he quoted it in his very last orchestral composition, the Symphonic Dances from 1940.

The Singapore Symphony Orchestra and Lan Shui have previously impressed critics worldwide with their performances of Rachmaninovs Second and Third Symphony, and are once again joined by the piano soloist Yevgeny Sudbin, with whom the team recently recorded what the reviewer in American Record Guide described as 'the most stunning performance of the Rhapsody [on a theme of Paganini] I’ve ever heard.'

A warm welcome to the next volume in the Singapore Symphony's series of Rachmaninov symphonies and piano concertos. Those familiar with the refreshing readings on previous albums will know what to expect: excellent, idiomatic and well-drilled orchestral playing, with the benefit of Sudbin's deeply musical and expressive pianism.

The First Symphony was written in 1895, some four years after the Piano Concerto No. 1. For its time, the work was highly inventive and its orchestration quite remarkable for such a seemingly inexperienced composer. In structure, it is a true cyclic work, with material from the first movement forming the basis of all the other movements. In particular, a rising chromatic triplet at the beginning of the first movement is used in one form or another like a signal at the start of the other three movements. The melodic and motivic materials are of two types; quiet and tranquil melodies emulating the Znameny Chants of the Russian Orthodox Church (which Rachmaninov had a life-long attraction to), and cleverly wrought, lively and often dance-like material which sounds like Russian folk-music but isn't.

The First Symphony suffered its first performance in the drunken hands of Glazunov, who in any case openly disliked the work, as also did Rimsky-Korsakov. The premiére was a complete dêbacle, with poor Rachmaninov outside the hall clinging on to the fire escape, unable to listen with the audience. Although the press were not totally against the new work, despite its poor performance, Rachmaninov was deeply affected and wrote nothing else of significance until, with the therapeutic aid of a Dr Dahl, he began work on the Second Piano Concerto. Although he vowed to make revisions to the First Symphony, he never got round to it, and the autograph full score was destroyed in the Revolution upheavals. Several copies of the orchestral parts remained lying untouched in several institutions but were re-discovered in 1944 and new performances arranged. It quickly emerged that the symphony was one of the best since the Tchaikovsky Pathétique; audiences loved it and it has finally entered concert repertoires.

There is plenty of competition amongst a handful of well-known performances of boxed sets of complete orchestral works; Ashkenazy, de Waart (Rachmaninov: Symphonies 1-3 - de Waart), Janssons and Previn amongst others. Ashkenazy, with the magnificent Concertgebouw Orchestra, has been my favourite for some time, and he is about 2 mins faster than Shui in the first movement, with the music definately benefiting from this. Nevertheless, Shui handles the rapid dynamic and pace changes in the symphony very well, with some gorgeous soft playing from all orchestral departments, and burnished brass whipping up the climaxes. Nevertheless, Ashkenazy's recording has deeper and more resonant bass (thanks to the splendid Concertgebouw acoustics), whereas the Singapore Esplanade Concert Hall is quite dry at lower frequencies). This richer sound and greater pace makes for a more buoyant and purposive first movement, but Shui and his orchestra still have some interesting things to "say".

My vote also goes to Ashkenazy for his finale, one of the most stirring and memorable openings of any symphonic movements. The brilliant, stuttering brass fanfares, backed by bass drum and tamtam benefit greatly from the rich Amsterdam acoustic, but on the other hand, Shui gets a more sharply etched rhythmic attack for the staccato chords, and the sound of the Singapore violins digging in is as good an "appassionato" as any other performances, and indeed his last movement is nearly 30 secs faster than Askenazy's finale.

The BIS booklet assures us that we are listening to the 1917 version of Rachmaninov's First Piano Concerto, but this is slightly puzzling. The concerto had only one public performance in 1892. The 18 year old (!) composer decided it needed radical revision. With a career demanding more and more of his time (not to mention the political upsets in Russia), he was only able to settle down to prepare a truly drastic revision in 1907. All the original material, however, was kept, but strengthened. This "final" version was only published in 1919 by Gutheil, and in biographies and catalogues of Rachmaninov is dated as 1919. However, it seems that an "interim" version was also prepared, probably also in 1917, which was later published as a "second version" in Russia in 1920. This was reprinted by Muzyka in 1920, again by Kalmus in 1965 and finally by Dover in 1999 with the other piano concertos in their very popular and affordable full score series. The piano part of this "interim" revision is very similar to the Gutheil veriosn, but there are differences in the orchestration which have not yet been detailed, according to my knowledge. I'm guessing that 1917 here means the "final" 1919 version.

Subin's affinity with Rachmaninov is displayed once more in his deeply thought and mercurial performance, ably accompanied by Shui and the Singapore Symphony. The violins are allowed discreet portamenti in the Big Tunes (sliding up or down to some notes in a phrase), as they were in the symphony. This devoted and thrillingly projected performance, with Rachmaninov's impish humour given full rein, is a complement to Hough's sparkling reading (Rachmaninov: 4 Piano Concertos, Paganini Rhapsody - Hough, Litton), each reflecting its pianist's characters.

Despite some personal preferences in Symphony 1, this is a very satisfying and highly entertaining album and comfortably takes its place in the BIS Rachmaninov series with a rather rare coupling of his works. Sonically it sounds very good, with the rather complex reverberance of the hall easily caught by the ear as the music decays (best heard in multichannel). The string basses, cellos and bass percussion are strongly present and very well balanced; only in direct comparison with Ashkenazy's rival RBCD Concertgebouw recording (and the over-reverberant de Waart) is the relative lack of exciting bass resonance in the Singapore version very noticeable.

If the album does not quite have the ultimate version in Rachmaninov's First Symphony recordings, Sudbin's First Concerto is not to be missed, and overall the album can happily be recommended. 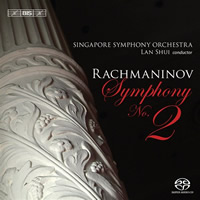 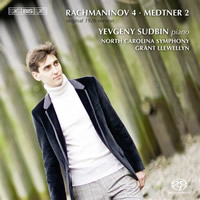 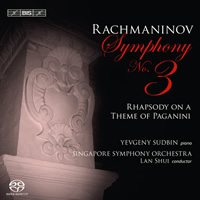 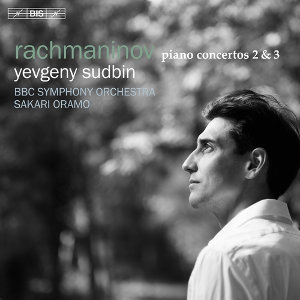 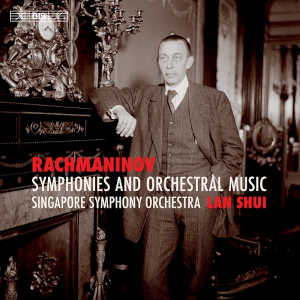