Finally, these impressive recordings are now available on SACD. Due to the difficulties of buying this TowerRecords album, you may find the following link ...

If you get one SACD of this astonishing album - get this one. The stereo layer is essentially identical to (and as-good-as) the MoFi release (UDSACD 2088), and unlike the ... 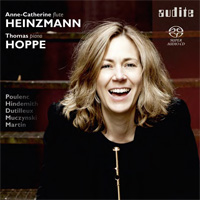 
This SACD presents main works of the repertoire for flute and piano from the 20th century. Regarding the history of the flute this period is of particular interest since the flute underwent a remarkable revival as a solo instrument during this time. The sonatas by Henri Dutilleux and Francis Poulenc represent the impulse for this development, which originated in France. In his series of sonatas for every melody instrument, accompanied by piano, Paul Hindemith began with the flute.

Frank Martin, the mediator between the German and French traditions, created a colourfully eloquent variant of the sonata form with his Ballad. The sonata written by the American composer Robert Muczynski became the most famous example of his classicist, brilliant style.