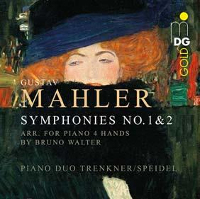 
Universal Access
Gustav Mahler’s symphonies number among the most complex and enigmatic works in the whole of the music literature. Usually of sweeping scope, they can hardly be grasped in full on a single hearing. Since listening assistance performs a valuable service here, Mahler attached the greatest importance to the arrangement form, with which he was able more easily to introduce other conductors to the structures of his works. The Evelinde Trenkner/Sontraud Speidel Piano Duo has now recorded Mahler’s first two symphonies in the masterfully crafted piano version for four hands by Bruno Walter.

Direct Connection
Walter collaborated closely with Mahler, first as a répétiteur in Hamburg and later as an assistant conductor in Vienna. After the composer’s death he conducted the premiere of Das Lied von der Erde and the Ninth Symphony. His expertise is in evidence in the piano version of the two symphonies; he marks dynamics and phrasing with the greatest precision, and the intricate texture of primary and secondary parts is realized tonally in the piano score. Fascinatingly enough, the structure of the works takes on a completely new significance when the instrumentation is reduced.

Genial Clarity
This aspect of course particularly attracts our attention in the vocal segments of the Second Symphony. Separated from the text and from the human voice, the line originally intended for singing is integrated into the musical texture. The structural construction is highlighted – and suddenly connections become clear that otherwise recede behind the sometimes highly sumptuous instrumentation.

Guiding Stars
The Evelinde Trenkner/Sontraud Speidel Piano Duo has recorded numerous great symphonic works in piano versions for four hands on MDG. The symbiotic team effort of these two pianists on a magnificent Steinway D of big symphonic sound (built in 1901!) illumines these masterful compositions in a new way and draws on all the powers of keyboard charm to make it easier to obtain access to these historically legitimated audio monuments.

In both performance & sound terms, this is probably about as good as one could ever hear this music arranged for 4-hands, 1-piano. The Piano Duo Trenker/Speidel pace the music well and point up the material as best they can; there are few moments throughout the two symphonies where one quibbles at their interpretative decisions besides that of actually choosing to perform them. There are far too many times when they cannot (mainly due to the limitations of the transcription) portray the drama and tension that exudes the symphonic scores.

Those who enjoy the range of dynamics of even half that in the orchestral score, never mind the range of tone colours (or offstage effects) should not be surprised that these are sorely lacking. This is of course not really a reflection on the performances themselves for a piano-duo can only go so far. What really is a shame is that there is so much great music written for piano-duo that has yet to make it onto SACD; this duo show here that they could be wonderful advocates for the genre. How very frustrating the Duo Trenker/Speidel's musicianship was wasted on Bruno Walter's transcriptions that, given that many amateur orchestras make a reasonable fist of Mahler's oeuvre, are just not needed these days. 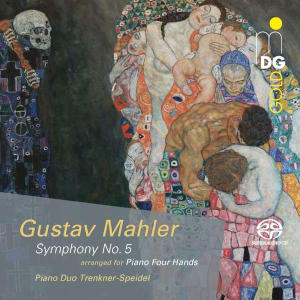