The next Sinfonia / Wilson SACD appears to be a Hollywood-based concert, due in September. 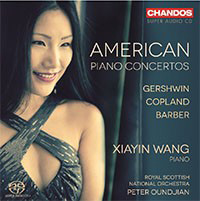 
The young Chinese-born pianist Xiayin Wang, now resident in the USA, has been enthralling audiences worldwide and gaining ever greater international acclaim with her winning combination of consummate technical brilliance, fine musicianship, and personal verve. Equally renowned as a recitalist and chamber musician, she is here the soloist in three great piano concertos by the American composers George Gershwin, Aaron Copland, and Samuel Barber, performed with the Royal Scottish National Orchestra under Peter Oundjian.

The Concerto in F by Gershwin, composed in 1925, represents one of his finest syntheses of the classical and jazz traditions. His extraordinary skill as a tunesmith is heard in full force within the concerto’s three movements, the work expressing his ‘unabashed delight in the stridency, the gaucheries, the joy and excitement of life as it is lived right here and now’. Xiayin Wang has already shown her natural affinity with Gershwin’s music in her previous Chandos release, playing Earl Wild’s Gershwin transcriptions with ‘verve, brilliance and sheer delight’, as American Record Guide put it.

Copland’s Piano Concerto from 1927 is another work influenced by jazz. At the time of its premiere, comparisons were inevitably drawn between this and Gershwin’s Concerto but Copland dismissed the influence of Gershwin. Rather, his style reflects the jazz elements used by composers living in Paris in the 1920s, such as Milhaud and Stravinsky. The work’s two distinct sections reflect what Copland believed to be the two basic moods of jazz, ‘the slow blues and the snappy number’.

Barber’s Pulitzer Prize winning Concerto for Piano dates from 1962. Like the other two works on the disc it shows the diversity of influence in American music in the twentieth century. Moments of harmonic ambiguity and muscular dissonance reflect Barber’s interest in Russian music, a subtle jazz influence enriching the musical language, especially in the rhythms of the compact finale. The music manifests a dramatic and rhetorical style, however, that is deeply rooted in a romanticism which pervades all of Barber’s output.

A wonderful release that should make new friends for two neglected concertos.

Samuel Barber's sole Piano Concerto was written in 1962 and while his Violin Concerto has achieved great success with audiences, the Piano Concerto has remained something of a Cinderella, certainly as far as concert promoters are concerned. For almost half a century the two recordings made in 1965 and 1991 by John Browning of this concerto have dominated the catalogue. Browning was the work's dedicate and his 1965 version with George Szell and the Cleveland Orchestra remains quite special though the sound quality is poor by today's standards. This excellent new recording by Xiayin Wang should bring this neglected work to a wider audience. Wang obviously believes in this piece and her formidable technique does full justice both to the refined lyricism of Barber's writing in the concerto's lovely slow movement and to the more virtuosic and dissonant passages in the outer ones.

Copland composed his Piano Concerto in 1926 for himself, – to play with Koussevitsky and the Boston Symphony Orchestra – but it has never attained the popularity of the less modernist Gershwin Concerto in F composed a year earlier. The work evokes the sense of a great American metropolis in its use of jazz and blues idioms and generally brash and witty style. Unusually, it is in two movements: a bluesy and reflective movement is followed by a contrasting one that incorporates Charleston rhythms. Xiayin Wang's performance of the solo part winningly combines thoughtful sensitivity with great élan whilst Peter Oundjian and the RNSO (especially the brass and percussion sections) provide vivid and convincingly idiomatic support.

Xiayin Wang's account of the Gershwin is, like the other two concertos on this disc, stylishly played, but in spite of the alert and characterful accompaniment from Peter Oundjian and the RSNO – and, of course, the excellent Chandos sound quality – it lacks a little of the necessary exuberance and pizzazz to make it into something special. Turn to the classic version by Earl Wild Gershwin: Rhapsody in Blue - Fiedler or the more recent versions by Freddy Kempff Gershwin: Rhapsody in Blue - Kempf, Litton and Jon Nakamatsu Gershwin: Piano Concerto in F, Rhapsody in Blue, Cuban Overture - Nakamatsu, Tyzik and the difference is clear. That said, no one buying this collection is likely to be disappointed by Ms. Wang's performance.

As I have already indicated the Royal Scottish National Orchestra play magnificently for their new Musical Director They have certainly absorbed the jazz style in their performances of the Copland and Gershwin concertos as well as switching effortlessly to the more overtly romantic approach required for the Barber. Furthermore the sound quality on this release is superb. The rich and realistic sounding piano is placed within a warm orchestral tapestry, and in all three concertos the generous ambience of the Royal Concert Hall, Glasgow is conveyed by the Chandos 24-bit / 96kHz 5.0 channel recording. 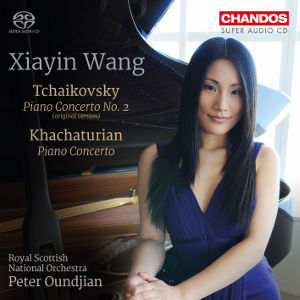