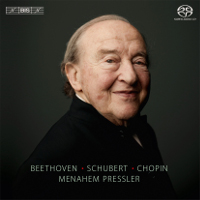 
Turning 90 in December 2013, Menahem Pressler was the pianist of the legendary Beaux Arts Trio for almost 55 years, and continues to enjoy a blossoming career as soloist and recitalist, while remaining as committed to teaching as ever.

For the greater part of his life, Pressler has lived with the two great sonatas recorded here, and has recounted how he studied Beethoven’s Sonata in A flat major, Op.110 as a young man after having fled Nazi Germany for Israel in 1939: ‘I didn't really understand many of the things that I understand now. I only understood the enormous emotional... tearing, tearing on my insides... I felt the beauty of that slow movement, so overwhelming.’

In another context he has discussed the piece in the context of Schubert’s final work for the piano, the Sonata in B flat major: ‘Beethoven’s Sonata Op. 110 illustrates idealism in the first movement, hedonism in the second and regret and pain in the last movement from which two fugues emerge triumphantly, as if saying, “Yes, life is worth living” – and this is what I feel.

This is to be considered alongside Schubert’s last sonata D.960, which explores the emotions of a man who knows he has a limited time to live, and in which the slow movement resonates like a funeral march whilst also showing happiness and peace of mind.’

As an epilogue to these two pillars of the piano literature, Menahem Pressler has chosen to play a particular favourite of his, a work that he often performs at the end of his recitals: Chopin’s brief but exquisite Nocturne in C sharp minor, Op. posth., composed in 1830 – only two years after Schubert’s Sonata – with a dedication to the composer’s sister.