Very interesting. I never had the regular CD versions of this, so I can't compare. But I really do question Esoteric's repertoire choices. They really are doing a lot of ... 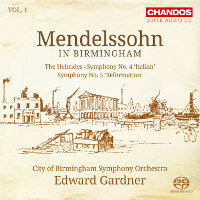 
Mendelssohn in Birmingham is an exciting new recording project with the City of Birmingham Symphony Orchestra and its Principal Guest Conductor, Edward Gardner. It celebrates Mendelssohn’s special relationship with the city’s Town Hall and will feature the complete symphonies, recorded there. It was a venue much loved by Mendelssohn, which saw him conduct many of his own works there, including premieres. Mendelssohn in Birmingham also encompasses a major concert series at the Town Hall which will run alongside these recordings.

Inspiration for the Overture The Hebrides sprang from experiencing the seas and landscapes of the Scottish Western Isles. The famous wave-like repeated patterns of its opening set the scene for a vivid work that has been a template for composers of ‘sea’ music ever since. Symphony No. 5 ‘Reformation’ was completed in 1832, and although the last of his numbered symphonies, it was the second to be composed. Typically for him, Mendelssohn had doubts about its quality and soon wrote it off. This self-criticism is highly exaggerated, for it is a finely crafted and original work. Similarly, despite the success of its premiere in 1833, Mendelssohn significantly revised and eventually abandoned his ‘Italian’ Symphony, No. 4. Fortunately, the original score from the premiere was recovered and published, posthumously, in 1851. The symphony is relatively short and its pervasive lightness of touch lends it a unique character and charm.

This is the first of a cycle of recordings that the Principal Guest Conductor, Edward Gardner, is making with the City of Birmingham Symphony Orchestra. Entitled "Mendelssohn in Birmingham", it is loosely based on the happy experiences that Mendelssohn enjoyed in Birmingham on his forays to England. Mendelssohn was invited to Birmingham to perform his works in the (then) newly opened Town Hall and the front cover is a sketch by Mendelssohn that depicts the Town Hall in the centre of the image (and is the only remnant of the sketch that still stands as shown).

Seemingly, to commemorate Mendelssohn's association with Birmingham, the works on this disc were recorded in the newly restored Town Hall instead of the far superior & more modern acoustic of Symphony Hall which would, given why Mendelssohn was invited, seem a more appropriate venue. Also odd, given the apparent desire to "recreate" Mendelssohn's visit to Birmingham, is the choice of Gardner to seat the violin sections next to one another instead of the then ubiquitous position of being opposite one another; a fair few moments of each score are rendered nonsensical by this bizarre, arguably anti-musical, choice and for those who this matters strongly, you are advised to steer clear. For those not so concerned, read on!

The Hebrides overture is given as good an account as one could wish for; plenty of freshness in the playing of all sections. The string passage work is played very cleanly indeed - all to the musics benefit - and it is apparent from the off that Gardner sought and obtained highly expressive woodwind playing. Gardner also is not frightened of pointing up the Romantic atmosphere; the timpani rolls are marvellously shaped to evoke stormy clouds. Although Gardner and CBSO choose to eschew many aspects of HIP (apart from the seating already mentioned, the brass for this repertoire is defiantly valved and the strings employ a lot of narrow vibrato), the trumpet playing is very bright and light to the benefit of textural clarity. String tone is also purposefully narrow (to describe it as thin would give the entirely wrong & pejorative impression) that also allows the sunnier aspects of the score to shine without apparent effort - a great achievement.

What is fascinating about this cycle will be how it compares to that of Andrew Litton's on BIS with the Bergen Philharmonic (Mendelssohn: Symphonies 1 & 4 - Litton, Mendelssohn: Symphonies 3 & 5 - Litton & Mendelssohn: Symphony No. 2 - Litton) as Edward Gardner is due to take over their helm from him in 2015. In the "Reformation" symphony, first comparisons are that Gardner adopts a far fleeter set of tempos than Litton does and that the CBSO is inferior in numbers compared to the Bergen Philharmonic; in some repertoire that could be viewed as problematic but the reverse applies here (we are still in full symphony orchestra territory, not that of the wonderfully thought provoking "Opening Doors" series on BIS). The prominence of the woodwind writing occurs without force here in a way that simply cannot happen with a larger band of players unless one is to be highly interventionist with regards to dynamics and (re)scoring. Here the double basses, thrillingly, vary the amount of heft given so that climaxes really register their arrival; the "Don Giovanni" moment towards the end of the first movement is very powerful indeed. It is then matched by a wonderful sotto voce restatement of the unifying choral before a thrilling conclusion. The second movement is, delightfully, taken at a genuine allegro vivace - this account reveals the inner momentum of Mendelssohn's score that carries the melodies bubbling along. The "slow" interlude is in this account, like that of Litton's, taken a flowing tempo that transforms it from a penitential outpouring into something closer to one of Mendelssohn's Song Without Words. The finale is an outpouring of joy that is uplifting; the only nit to pick is arguably the relative balance given to brass & strings just before the final chorale - but it really is nitpicking!

The Italian symphony is worn in a similarly light manner, although in the first movement Litton has a very slight edge in terms of tempo. That the Bergen players don't feel faster is in no small part due to the care and attention that Gardner & the CBSO give to lightening the textures and investing a great deal in the rhythmic pointing to give a constant onwards dynamism. A wonderfully relaxed in character slow movement and sunny third movement cleanse the palette and provide much needed calm before the storm that Gardner gets his players to whip up in the finale. The timpani contribution to push the music into the development is extraordinarily exciting but far from the only moment that causes one to catch ones breath. The sense of drive is unremitting to the last which makes for a very exciting end to the disc. An honourable mention must go to Mendelssohn: Symphonies 3 & 4 - Holliger for the use of the later (far less familiar) score of the Italian symphony which is somewhat dismissively mentioned in the otherwise excellent notes for this release.

The sound is good but not exceptional. As mentioned above, the choice of using the Town Hall instead of Symphony Hall may be symbolically appropriate but as other more important musical symbols were dispensed with, it's a great shame that Chandos stuck to this one for the acoustic of Symphony Hall is unrivalled in the UK in respect of clarity and beauty of sound.

Recommended if the caveats mentioned above do not overly concern one. 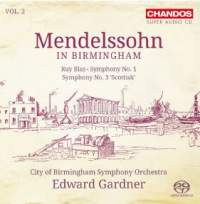 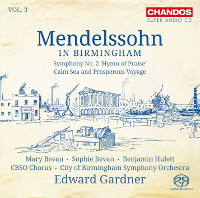 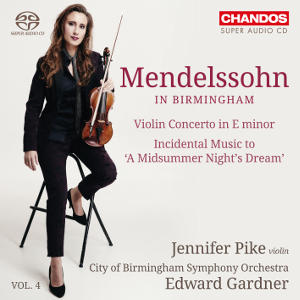 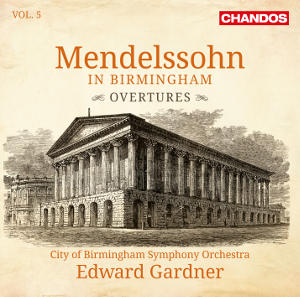