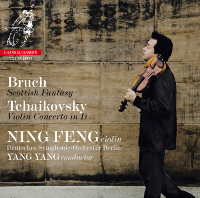 
Violinists visiting Max Bruch to play him his 1st Violin Concerto (the violin concerto, though he wrote three) were chased away by the composer, who shouted that he had written a lot more than just that. The great success of this delightful piece has cast a shadow over his other music. And those who know the work – or hear it for the first time – understand only too well why, for it is rightly one of the most popular of all romantic violin concertos.

However, Bruch another work for violin and orchestra which is perhaps even more special. For the soloist it is technically more more difficult than the 1st Violin Concerto, and it is a free fantasy rather than a traditional three movement concerto. It is the Scottish Fantasy op. 46 for violin and orchestra (1880), written for the legendary virtuoso Pablo de Sarasate, a Spaniard who spent his entire life in France. Shortly before, Edouard Lalo had composed his exotic and daredevil Symphonie Espagnole (1875) for De Sarasate. This is another strange mixture of symphony, solo concerto and suite. Bruch hesitated to use the title fantasy’, since this is usually a rather short piece in free form, while he had written a considerable work lasting half an hour, with a range of contrasting moods.

The young Chinese violinist Ning Feng, a winner of many international prizes, has already made three outstanding solo recital discs for Channel Classics – Hello Mr. Paganini - Ning Feng, Solo - Ning Feng and Solo 2 - Ning Feng, but this is his first concerto disc for the label.

The 'Scottish Fantasy' of Max Bruch has always been overshadowed to some extent by the popularity of his 1st Violin Concerto, yet in many respects it could be considered to be the finer work. Bruch's imaginative use of Scottish folk tunes is beguiling and the alternating slow-fast five sections make for a work of contrasts and much variety. Ning Feng's hushed playing in the opening 'Introduction: Grave' immediately establishes the stature of this performance and his lyrical outpourings in the piece's slower sections, such as the gorgeous 'Andante sostenuto', do full justice to Bruch's richly melodic writing. The final 'Allegro guerriero' opens at a fairly steady pace, but gradually builds in excitement thanks to Ning Feng's dazzling playing and the fine support from Yang Yang and the Deutsches Symphonie-Orchester, Berlin.

The Tchaikovsky Violin Concerto has received so many excellent recordings on both CD and SACD that one wonders whether there is any room left for another. The answer, based on this account from Ning Feng, is a resounding yes. He plays this work as if it were newly minted. Tempi in all three movements are spacious, possibly as a result of Feng's insistence on clear articulation of the solo part and a reluctance to indulge in mere virtuosity at the expense of the work's deeper musical values. Some may wish for a touch more urgency in the Concerto's outer movements, but overall I was entirely convinced by the sheer beauty and musicality of his interpretation. The laser accuracy of Feng's playing coupled with the bright timbre of his 2007 Stefan-Peter instrument makes this performance a gripping aural and musical experience.

Even by Channel Classics exalted standards this 5.0 DSD recording is exceptional. The sound stage is wide and deep with every instrumental line, especially that of the soloist, clearly etched. The warm ambience of the Teldex studio in Berlin is marvellously captured once again allowing the fine orchestral accompaniment by the DSO under Yang Yang to make its mark.

However many recordings of these two works you have in your collection you should investigate this one – more please from this outstanding artist.

You have to keep reminding yourself how good these performances are. Ning Feng is an artist of exceptional ability combing supreme artistry with technical brilliance and deep emotional sensitivity. It seems he has that rare gift of turning everything he touches into gold, a Heifetz rather than Midas. One grows impatient for his next release but for now this recording meets every need and should be played as often as possible. Five stars in every respect.

We had the very great privilege of seeing Ning Feng live last evening at Bournemouth in a superb account of the Brahms Violin Concerto with the BSO under the baton of Kirill Karabits our Chief Conductor. An outstanding deeply insightful performance from China's leading violinist.

What a pity that we are denied access to his recordings on SACD.