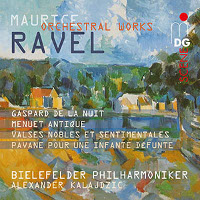 
Bloodcurdling Discovery
Maurice Ravel instrumented many of his piano compositions for full orchestra, but even this tone-color magician kept his safe distance from his bloodcurdling Gaspard de la nuit. It was left to Marius Constant to accomplish this Herculean task, and under the conductor Alexander Kalajdzic the Bielefeld Philharmonic reveals previously unexplored and undiscovered dimensions of this masterpiece of French piano music.

Horror Story
Creepy is the word: in “Le gibet” the wind sets in motion the hanged man’s skeleton on the gallows. Or the grotesque leaps in “Scarbo,” introduced by the lurking contrabassoon: the spooky goblin’s fingernail never scratched so spine-tinglingly on the silken bedspread, and the dwarf never grew more overpoweringly to cathedral grandeur! The Bielefeld musicians have spared nothing: a whole corps of percussion instruments supports the orchestra, it too opulently arrayed, and the result is a tone painting of impressive dimensions distinguished by will-o’-the-wisp color and lucid transparency.

Sentimental Waltzes
The Bielefeld musicians open their MDG debut with Valses nobles et sentimentales. This waltz sequence begins with animation, but quiet tones later predominate. A special highlight: fragments of the previous waltzes waft through the last one, just like sentimental memories of long-forgotten times. The strict “Menuet antique” and the magnificent and simple “Pavane pour un infante défunte” round off this intelligently planned program.

Magical Sparkle
Ravel would have been pleased: MDG’s patented 2+2+2 production technique makes his music sparkle down to the finest detail of instrumentation. It is simply marvelous how the impressive orchestral forces spread out before the listener – sound magic that will make you want more – and more – and more!

The main interest in this programme of orchestrations of four of Ravel's most familiar piano works is that of 'Gaspard de la Nuit' based on poems by Aloysius Bertrand (1807-1841). This was not orchestrated by Ravel himself but by the French composer and conductor Marius Constant in 1990. Constant's brilliant realisation in orchestral terms of what is one of Ravel's finest piano works transforms the three-movement keyboard masterpiece into a glittering orchestral depiction of Bertand's nocturnal and often nightmarish images. The Bielefelder Philharmoniker under their Croatian conductor Alexander Kalajdzic respond accordingly, with dazzling playing that is captured in the clear but slightly anonymous acoustic of the Rudolf-Oetker-Halle in Bielefeld.

The remainder of the program is more familiar fare. Here the Bielefelder Philharmoniker inevitably face fierce competition, both on CD and SACD, from some of the greatest interpreters of these marvellous scores. It would be something of a miracle if this orchestra could possibly match the virtuoso playing and tonal sophistication from say Boulez and the Cleveland Orchestra, or Ozawa and the Boston Symphony. However, it is unlikely that anyone will be disappointed by their committed performances, even if they sometimes lack the flamboyance and panache of those esteemed interpreters mentioned above.

One's only quibble is that on a full-price SACD with a playing time of just over 51 minutes it ought to have been possible to have added at least a couple more Ravel orchestrations, such as 'Une barque sur l'océon or 'Alborada del Gracioso'.

MDG's 2+2+2 multi-channel recording presents a most realistic and finely delineated orchestral image with a moderate amount of hall ambience emanating from the rear speakers.