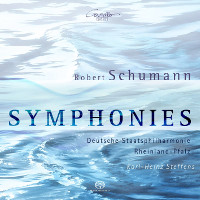 
The genesis of Robert Schumann’s symphonies thus extends over a relatively brief period of time of approximately ten years, and the various creative periods differ less than those of his great role model – and shadow – Beethoven. Instead, the four works are different interpretations of the same aspiration – to find the expressive breadth for which the piano was “too narrow” in the large orchestra without focusing special attention on the traditional formal model.