That Johann Sebastian Bach as Cantor at St Thomas Church in Leipzig was expected to provide the churchgoers with suitably impressive musical performances each Sunday and Feast day is quite widely known. Fewer will be aware of the fact that the post as director of the city's Collegium Musicum, which he held from 1729, in some ways was just as demanding and time-consuming. Weekly concerts all year round – and twice-weekly during the three busy fair periods (New Year, Easter and Michaelmas) – meant that Bach during his ten years as director spent far more time performing secular instrumental music in Zimmermann's coffee house – the usual concert venue – than cantatas in church.

As with his church duties, Bach will also have been expected to provide repertoire for the ensemble, composing as well as arranging music by others and himself for it. Among such works will have been his various harpsichord concertos: with Bach's great reputation as a keyboard virtuoso, it is not difficult to imagine the demand by the Leipzig audiences to see their local hero shine on the stage.

Three double concertos for harpsichord by Bach survive, all dating from around 1736, and all arrangements of earlier compositions. BWV 1060 is thought to have originated as a now lost double concerto for oboe and violin, while BWV 1062 is a reworking of the well-loved concerto for two violins. Unlike these two works, BWV 1061 was composed for two harpsichords from the outset, but probably started out as a concerto without orchestral accompaniment – this is believed to have been added later.

Performing these works, with a quintet of string players from the Bach Collegium Japan, Masaaki Suzuki is joined by his son Masato. For the present disc Masato Suzuki has also taken a page from Bach’s own book, in arranging the composer’s Orchestral Suite No.1 for two unaccompanied harpsichords.

I’m sure that visitors of this site have several copies of Bach’s Concerti for two harpsichords. No matter in what format. Although only five out of five have recommended it, and I’m one of them, there may, of course, be many more who are susceptible to Suzuki’s reading of these popular concerti.

It is no secret that HIP readings differ enormously. If I had to label Suzuki’s approach, I would stamp it ‘traditional’. The kind of reading that the more mature music lovers among us may recognize and appreciate as part of a lifelong Bach addiction. However, over the past couple of years, other versions have seen the light breathing a touch of ‘modern times’ to use a title of a Charly Chaplin film.

Take for instance the recent (Part III) release of Pentatone with Buccarella / Laporte / Corti and Il Pomo d'Oro, (eClassical FLAC 24-bit PCM Hi-Res Stereo, not listed on this site as the physical copy is RBCD only) in a reading that is of an extraordinary virtuosity but, despite its ‘historical’ presentation, so much commensurate with the rush of present-day life that it is, indeed, the opposite of Suzuki’s comfortably ‘rocking’ Bach. I find it difficult to accept that ‘allegro’ must consistently be played ‘presto’, however excitingly it comes across on first hearing. Much detail risks getting lost in the fast lane. That said, the younger generation, perhaps better adapted to the urge of daily, professional life, might prefer it over an ‘old-fashioned’ Suzuki.

Being a pupil of Ton Koopman at the Sweelinck Conservatory in Amsterdam, there can’t be any doubt about Masaaki Suzuki’s Bach credentials. Nor can there be much doubt about those of Francesco Corti: Geneva, Amsterdam, and … once a member of Suzuki’s Bach Collegium Japan! Nonetheless, the difference is there. And I have no other means to facilitate a choice than to say that it, like so often, boils down to an appreciation of a musician’s interpretation and, above all, the listener’s personal taste. Mine is Suzuki’s. Father&Son playing in complementary union (so to speak) supported by a warm orchestral accompaniment that is in perfect balance with the two beautifully tuned Willem Kroesbergen period instrument copies.

I cannot compare with Bach: Keyboard Concertos, Vol. 3 - Häkkinen, Hantaï as I don’t have it, but on the basis of the link given in the comment section, I suppose it will accommodate much of the taste of all those who want more oomph for the buck. The musicianship of both soloists is in any case known to be beyond reproach. 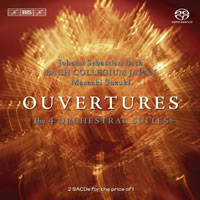 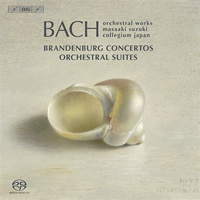