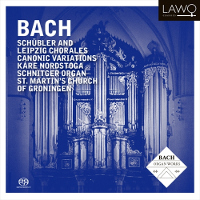 
The fifth and sixth album in this series featuring Bach's complete organ works were recorded in St. Martin's Church in Groningen, on an organ representing the most noble qualities of the Baroque sound. The construction of the instrument is usually attributed to the well-known organ builder of the late 1600s, Arp Schnitger, although some stops date back to 1450.

Most organ lovers tend to revel in Bach's heroic pieces, his toccatas, preludes and fugues, many of which were used for testing new organs (a service for which he was well known in Thuringia and beyond). There was, however, another genre, that of of sacred music, where Bach was also a master - the Chorales for organ. Following the composition and authorship of cogent biblical sentiments in his Services into melodies by Luther himself, later composers took up and added to the chorale tunes which became familiar to every Lutheran in their weekly hymns. The melodies were also woven into short organ pieces, often called Chorale Preludes, which appear mainly to have been played during Communion (Bach's 'Jesus Christus, unser Heiland' from the Leipzig Chorale collection has a note on the autograph - "Sub Communione", a good clue).

Bach took these simple melodies and brought the art of Organ Chorale writing to new heights. Most of them were written while he was in his only post ever as an Organist, at the Weimar Court. Towards the end of his life he gathered what he presumably thought to be his best chorales into three sets for publication, which are found on this double SA-CD set from Lawo. The Chorale Preludes here display examples of the all the formal elements which Bach used with such invention and innovation (Chorale motet, Chorale partita, Ornamental chorale, Cantus firmus chorale and Chorale trio). A number of Chorales also take on the guise of Bach's favourite French dances of the time, and a sense of the dance in Bach's music is essential for performances of these sacred works, just as much as do his dance suites for harpsichord.

The so-called Schübler Chorales (named after Bach's publisher) are 6 Chorale Preludes, probably printed in 1748. They seem to be organ versions from cantatas of the early Leipzig years (1724-1731) and focus on their chorale melodies (BMV 645-650). The largest compilation, often called "The Eighteen" or "Leipzig Chorales" mostly contains Chorale preludes from Bach's Weimar days which Bach reworked, bringing the techniques of Pachelbel and Buxtehude to a whole new plane (BWV 651-668).

BWV 769, "Canonic Variations from 'From Heaven above to Earth I come'" is the latest of the published chorales. Having arranged this melody several times at various periods, Bach did so again in 1747 as part of his submission for entry to Leipzig's Society of the Music Sciences. Their requirement was to be scholarly but not "impracticably theoretical", rather to arouse or gratify human emotions. The word "Canonic" in the title indicates that the melody was set against itself against a few bars apart (like the famous "Frère Jacques"). The parts began at differences on the stave of each canon, so an octave apart, a fifth apart and so on. By the way, Bach was admitted to the Society!

The organ chosen for these recordings is that of the famous St Martin's Church of Gröningen, Netherlands. The church has a long history, as does the organ, which first dates from 1450, rebuilt around 1450. Such was the quality of this work, many of the 1450 pipes remain in the present day configuration. The Gothic organ was replaced by a Renaissance one in 1542, enlarged in 1627/8, and rebuilt by Arp Schnitger (one of Bach's favourite organ builders) in 1691/2. Other rebuilds took place in the C18th, but the organ was horribly treated in the C20th. however, a plan was made to return it to its Schnitger form of 1749. Playable again by 1984, the organ has gained a strong reputation for its power, clarity and beauty of timbres.

Kåre Nodstanga has been the organist of Oslo Cathedral since 1982. His breadth of experience and deep knowledge of Bach's music inform his readings here of the chorale preludes, giving each one a considered and technically polished character based on the context of their Lutheran verses. The maturity of his approach is reflected in his wonderful registrations with the St Mark's organ. Many recordings of these short pieces have been used by organists as vehicles for showing off all the unusual solo stops and most terrifying pedal stops of their instruments. But if our belief that the Chorales were mostly used during the Lutheran communion is correct, they would be required mostly to give a mood of enlightened contemplation for the communicants and watchers in the congregation, so very few of them are marked to be played with full organ, resplendent with fiery mixtures and deep pedals.

Nodstanga bases the contemplative chorales in the organ's beautiful Principal chorus (the diapason pipe registers which are the heart of every organ). Solo stops bringing down the cantus firmus (chorale tune) here always blend well with the other voices, not drawing attention too much away from Bach's often astonishing complexity in his crossing and entwining counterpoint. A touch of celestial 4' flute, a string-like tenor and some discreet tremolo add much pleasure but never jar. The result is a kind of radiant musical communication which marries perfectly with the church's warm and luminous resonance.

Lawo's discs are housed in the slender form of the double plastic CD case, together with a very useful set of notes in Norwegian and English. A list of the disposition of registers for the three manuals and pedals is also provided. Listeners with perfect pitch should be aware that the organ is tuned to A'=465HZ.

At the time of writing, a partially competing 2-disc set of The 18 Chorale Preludes by Canadian organist Craig G. Humber (Bach: Leipzig Chorales - Humber) by MDG Scene also has some very good playing, but to my ears lacks the coherence and subtle integration of Nodstanga's registrations. The sound of the Silbermann organ on which Humber plays does, however, make a very interesting comparison, track by track, with Nodstanga's Schnitger. However, the Lawo set also has the 6 Schübler Chorales and the rarely heard but splendid Canonic Variations, so my preference would certainly be for the Lawo set.

I have played these discs frequently, marvelling each time at the affectionate and idiomatic performances and excellent sonics. Often, long collections of many short pieces can evoke a listener's wandering attention. Nordstoga's collection indeed sets the tireless, encompassing mood of enlightened contemplation, whatever one's religious status . Highly recommended. 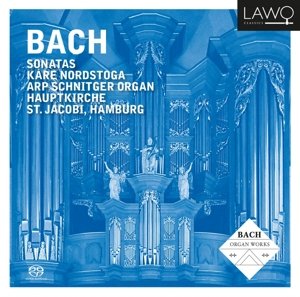