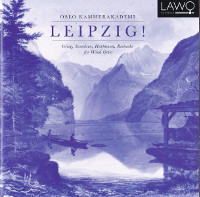 
The year 2014 is a good year to place Norwegian music in the context of the European cultural landscape. With what, or with whom, do the origins and development of Norwegian and Scandinavian music lie? Oslo Kammerakademi's recording of works by Grieg, Svendsen, Hartmann, and Reinecke sheds light on this question.

Oslo Kammerakademi are back, after their stunning Beethoven for Wind Octet disc (Beethoven for Wind Octet - Symphony No. 7, Parthia & Rondo). The band comprises some of Scandinavia's leading wind soloists under their Artistic Director and initiator Friedemann Strunk, solo oboist for the Oslo Philharmonic Orchestra. His companions are principals or co-principals from the Oslo, Bergen and other orchestras, as well as members of the Staff Band of the Norwegian Army.

Further exploring their "Harmonie" wind music repertoire, they move on to the Late Romantic period, when a dearth of musical training institutions in Scandinavia prompted its budding composers to study in Leipzig, often attending the Conservatory founded by Mendelssohn. For composers such as Grieg, Nielsen, Sibelius, Svendsen, Hartmann and Reineke, Leipzig was a major stop in a tour featuring Paris, Berlin and Vienna.

The ensemble uses historical brass instruments for the classical repertoire to lend both authenticity and transparency to their distinctive sound. In this cleverly-constructed programme, their pair of Viennese horns make a considerable contribution to the already wonderful sonorities of the band. The horns, still used in all the music institutions of Vienna, are very similar in size and bore dimensions to valve-less horns. They were enhanced by the addition of Uhlman's double-cylinder valve-system, giving them access to the full chromatic scale and adding to the virtuosity of their players. On this disc, when the horns sing out from their position at the back of the ensemble in Jar Church make a thrilling and unique sound, and when playing softly, as in the slow movements of this programme, they provide a sonorous carpet of rich tone.

While it is Grieg's pieces which have the most memorable melodies, the others have superb craftsmanship and are given performances which are absorbing in illuminating structures and generate subtly varied sonorities. These pieces certainly bear repeated listening.

If Svendsen's Norwegian Rhapsody doesn't match the rival Swedish Rhapsody No. 1 by Hugo Alfvén with its unforgettable sunny dance tune, in the more sober Norwegian Rhapsody, the wind instruments here reflect its folkloric material most sympathetically and with more depth.

The Dane Emil Hartmann's Serenade was influenced by elder countryman Niels Gade perhaps more than his studies in Leipzig. It is one of his Hartman's works after long bouts of illness, yet shows no sign of depression, instead glowing with charm and elegance, and notable for its pastoral moods (horns and birdsong from flute), with a sparklingly energetic finale. Carl Reinecke was born in Alona (then Danish, today part of Hamburg). He studied in Leipzig from 1843-1846, and returned there after twenty years in the Royal Danish service. He became chief conductor of the Gewandhous Orchestra for a record period of 35 years. Reinecke was acquainted with Mendelssohn, Schumann, Brahms, Liszt and Bruckner. His octet provides echoes of these composers, as well as folk music from Denmark. The heart of this lovely chamber work is its Adagio third movement, with superb blending of the instruments in rich combinations, played with laid-back poise and velvety sound by the Oslo Kammerakademi.

This recording seems to have been originated in DXD and has a wonderful clarity and collects fine timbral details from each instrument. The sounds are floated into the sympathetic acoustic of Jar Church, now often a venue for recording. My one regret for this excellent disc is the lack of a multichannel track, although the stereo provides a convincing 5.1 three-dimensional setting after processing with 32-bit Dolby PLIIX.

An attractive design of its Digipak enclosure carries a very informative essay about the music in Norwegian, English and German. This new disc from Oslo Kammerakademi certainly deserves full marks from me. An ideal disc to play on a summer evening, perhaps with a glass of wine to hand.