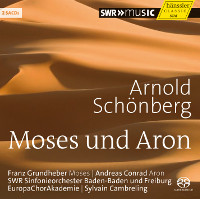 
Schoenberg's masterpiece in the twelve-tone system he developed was his unfinished opera "Moses und Aron", a vastly complex work based on a single tone row. That it remained a fragment may be essential to its spiritual message, for while Schoenberg never stated it explicitly, it would seem that he left this most ambitious project of his mature style incomplete on purpose. It is almost as though it would be impious to give a final and definitive form to matters so profound and spiritual; like the name of Yahweh they are ineffable.

Even today, Arnold Schoenberg's opera "Moses und Aron" is an incredibly intense listening experience. Whatever one thinks about Schoenberg‘s musical language - here it finds an expressiveness and cohesion which the listener cannot escape. This is especially the case in this new production of a work which does not appear on CD too often, sounding wonderfully transparent even in its most powerful and loudest moments. Appearing in the role of Moses, the world-famous baritone Franz Grundheber delivers an impressive characterization of the prophetic/revolutionary. Tenor Andreas Conrad embodies Moses‘ practically oriented brother Aron with a rare intensity, and the EuropaChorAkademie are outstanding as the third component of the drama, the Israelites. The entire production is overseen by one of the most convincing conductors for this repertoire, Sylvain Cambreling who leads the flawlessly playing orchestra. 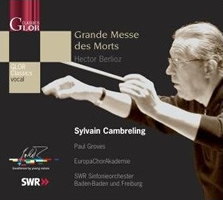 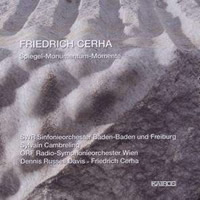